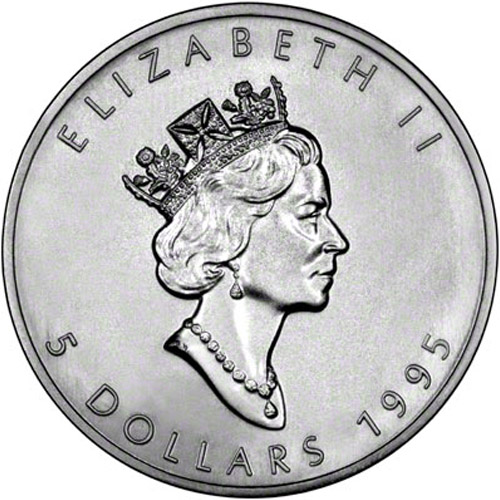 Amidst positive economic times in North America and around the globe, silver bullion coin programs struggled to attract demand as investors trusted in stocks and bonds. The 1995 Canadian Silver Maple Leaf suffered falling mintage levels at this time just as other major programs did, meaning fewer of those specimens were released and few linger today in good condition. The 1995 1 oz Canadian Silver Maple Leaf Coin is currently available to you for purchase online from JM Bullion.

In 1995, the markets in North America were surging. Typically, when markets do well precious metals suffer lackluster demand as investors trust in stocks and bonds to return positive yields. While the price of silver remained strong in 1995, the strength of the markets didnt push buyers toward bullion coinage.

Silver prices had been on the rise in the 1990s after flattening in the late 1980s and early 1990s. By 1995, the average silver price throughout the year was $5.20 per ounce, with silver hitting a low of $4.65 per ounce in March and rebounding above $6.00 per ounce in May. Silver would finish the year in retreat from that $6 per ounce figure though.

The 1995 1 oz Canadian Silver Maple Leaf Coin has one of the lowest mintage figures youll find among any available year of Silver Maple Leafs. At just 326,244 coins, the 1995 issue of the coin remains the third-lowest in program history. The coins were released in the second year of a four-year drop in mintage that saw the coins bottom out in 1997.

On the reverse of all Canadian Silver Maple Leaf coins is the sugar maple leaf. A symbol of the nation of Canada, the maple leaf is used by countless government agencies, professional sports teams, and even the national flag of Canada to represent the Canadian people.

The obverse of all 1995 1 oz Canadian Silver Maple Leaf coins features Queen Elizabeth II. Her Majestys third-generation portrait appears on this coin, capturing the Queen at age 64. This is considered by many the most regal and elegant design of Her Majesty as she wears a much larger crown, earrings, and a more ornate necklace in the effigy.

We encourage JM Bullion customers to contact us with questions at 800-276-6508. You can also reach out to us online through our live chat and email features.