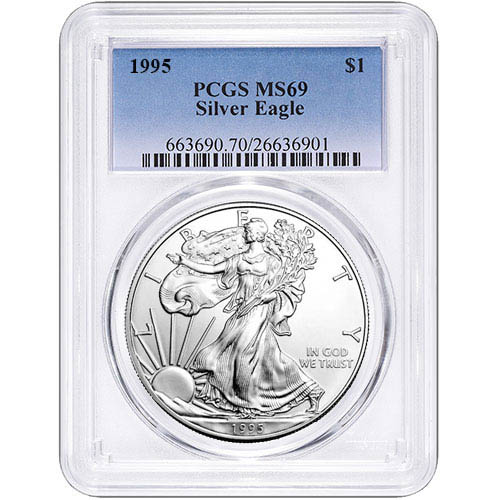 The United States Mint opted to celebrate the 10th anniversary of the American Silver Eagle coins in 1995 on the date of the 10th issue, rather than 1996 on the 10th year. As a result of this celebration, the 1995 Silver Eagles experienced a slight uptick in demand compared to the previous year. Today, 1995 1 oz American Silver Eagle Coins are available to you online from JM Bullion with PCGS certification.

Subsequent anniversary year celebrations for the American Silver Eagle would occur based on the 1986 release date rather than the number of issues. For example, the 20th anniversary was celebrated in 2006 and the Silver Eagle hit its milestone 30th anniversary in 2016. The US Mint did not celebrate with any special bullion release of the coins this year, though an additional Proof Silver Eagle was made available with the lowest mintage figure in the collectible coin’s history.

All of the 1995 1 oz American Silver Eagle Coins in this listing come to you with a Mint State 69 certification from the PCGS. Coins in this condition showcase full, original mint luster and no more than two minor detracting flaws. Examples of acceptable flaws at this grade level include only minuscule contact marks or hairlines.

On the obverse of 1995 1 oz American Silver Eagles is Walking Liberty. This design captures Liberty’s figure in left-profile relief as she walks toward the sun setting in the distance. Her right hand is outstretched and she wears the American flag over her shoulders.

The reverse side of all American Silver Eagle coins includes the heraldic eagle of the United States. This design, in general, dates to 1794. This particular version is a modern one that was crafted in 1986 by John Mercanti.