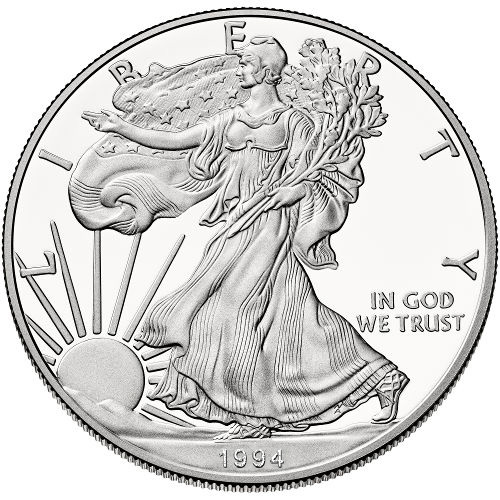 After enjoying higher mintage levels between 5.5 million and 7.7 million during the first 8 years of the American Silver Eagle program, 1994 marked the start of five years that saw mintage figures remain exceptionally low amidst a booming American economy that saw job and wage growth, not to mention a strong market economy.

The United States Mint refined Adolph A. Weinman’s Walking Liberty design, after 39 years in the shadows, for use on the obverse face of the American Silver Eagle. Weinman’s creation was previously used on the Walking Liberty Half Dollar from 1916 when he designed it, to 1947 when a new half-dollar image was created.

On the reverse is the first major design from then-Chief Engraver of the United States Mint, John Mercanti. His heraldic eagle features the American bald eagle set behind the nation’s heraldic shield, with arrows in one talon, an olive branch in the other, and 13 stars above its head to represent the nation’s founding colonies.

If you have any questions, we encourage you to reach out to a JM Bullion associate. You can contact us on the phone at 800-276-6508, online using our live chat, and via email.