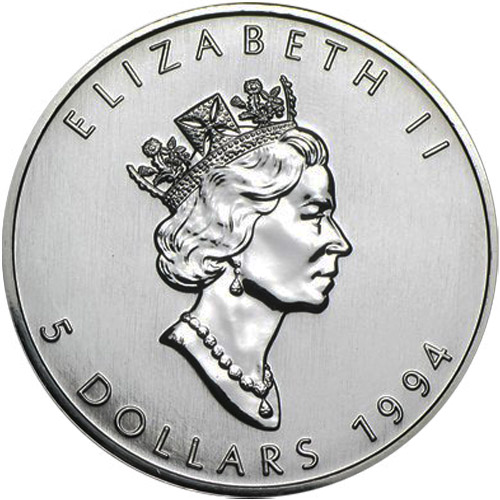 After reversing course in 1993, the Canadian Silver Maple Leaf coin began a four-year descent in mintage that coincided with improving economic conditions and rising prices in silver. The 1994 issue of the official Canadian silver bullion coin was down modestly from the prior year, but was a sign of things to come. Right now, 1994 1 oz Canadian Silver Maple Leaf Coins are available to purchase online from JM Bullion.

The 1988 introduction of the Silver Maple Leaf was special beyond its status as the first expanded option in the collection. The Canadian Silver Maple Leaf coin was the first annual-release silver bullion coin to feature .9999 pure silver content. Few other modern bullion coins feature purity this high, with others such as the American Silver Eagle and Chinese Silver Panda still using .999 pure silver.

Despite significant increases in the price of silver, the demand for the 1994 Canadian Silver Maple Leaf waned on improving economic conditions in North American markets. The mid-1990s marked a period of strong economic growth, which tends to push people away from precious metals. Silver averaged $5.28 per ounce, up nearly $1 from 1993s average, and traded as high as $5.75 per ounce in March of 1994.

On the reverse of Canadian Silver Maple Leaf coins is the iconic sugar maple leaf design. This image first appeared on the Gold Maple Leaf in 1979 and was created by Walter Ott of the Royal Canadian Mint. His design lives on today on all Canadian Maple Leaf variants.

The obverse of the 1994 1 oz Canadian Silver Maple Leaf coin bears the effigy of Queen Elizabeth II. Her Majesty is shown here in the third-generation design created in 1990 by Dora de Pedery-Hunt. Used on the coins through 2002, this design is considered the most elegant and regal portrait of Her Majesty to feature on Canadian coins.

If you have any questions, please feel free to reach out to JM Bullion. You can contact our customer service team on the phone at 800-276-6508, online using our live chat, and via our email address.