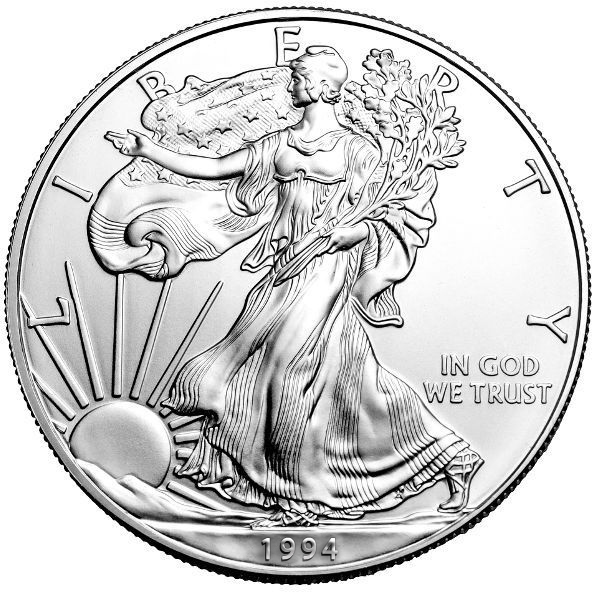 Mintage of American Silver Eagle coins in the early 1990s was very hit-or-miss. The quick onset of the Persian Gulf War, and its quicker conclusion, coupled with an improving economy beginning in 1993 led to dramatic changes in precious metal prices and demand for bullion coins.

The 1994 American Silver Eagle coin exhibited a much steeper decline in production than the previous series of spikes and drops, falling by 2.6 million coins. There were 4.2 million bullion coins struck and 372,168 proof coins sold. 1994 not only marked the second lowest bullion mintage of all time, but also the lowest ever mintage of Proof American Silver Eagle coins.

On the obverse is the familiar Walking Liberty image from Adolph A. Weinman, which previously adorned the Walking Liberty Half Dollar from 1916 to 1947. John Mercanti’s heraldic eagle, a staple of American coins going back to 1793, appears on the reverse of these coins.

Please feel free to reach out to JM Bullion if you have any questions. Our associates are available on the phone at 800-276-6508, online using our live web chat feature, and via our email address. Be sure to also view our Proof and Uncirculated Silver Eagles.