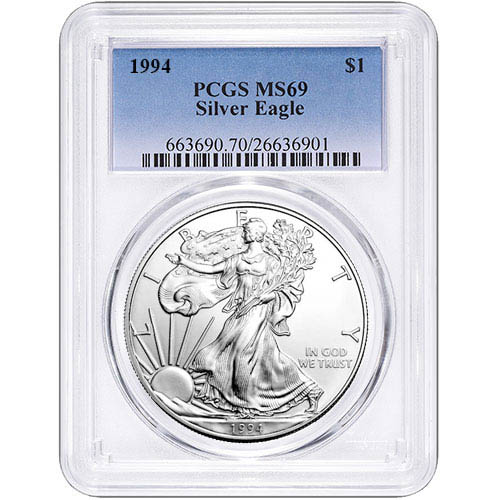 As the 1 oz silver coins of the American Silver Eagle series approached the 10-year mark in availability, demand for the coins was low. The 1994 coin had a mintage figure that was 2.5 million coins lower than the year before and was, at the time, the lowest mintage in the program’s history. Right now, 1994 1 oz American Silver Eagle Coins are available to purchase online from JM Bullion with a PCGS certification.

Each individual 1994 1 oz American Silver Eagle Coin available to you here today comes with a Mint State 69 certification from the PCGS. Known as near-perfect coins, these specimens exhibit full, original mint luster with a maximum of two minor detracting flaws. Acceptable flaws at this certification level include minuscule contact marks or hairlines and must be located outside of the primary focal points of the coin.

After four years of falling average prices, silver jumped nearly one dollar on average in 1994 to $5.28 per ounce. Throughout the year, silver ranged as high as $5.75 per ounce and had a modest low of $4.78 per ounce, which was still higher than the average throughout all of 1993.

On the obverse of 1994 American Silver Eagle Coins is a design from Adolph A. Weinman. This image is known as Walking Liberty and depicts her figure walking toward the setting sun on the horizon. It is meant to symbolize the nation’s move toward a brighter future.

The reverse of 1994 1 oz American Silver Eagles includes the heraldic eagle of the United States. Originally designed in 1794 by Robert Scot, first Chief Engraver of the United States Mint, this particular design was created by John Mercanti in 1986. Mercanti began his career at the US Mint in the 1970s and would finish his career as the 12th Chief Engraver, a post he held from 2006 to 2010.