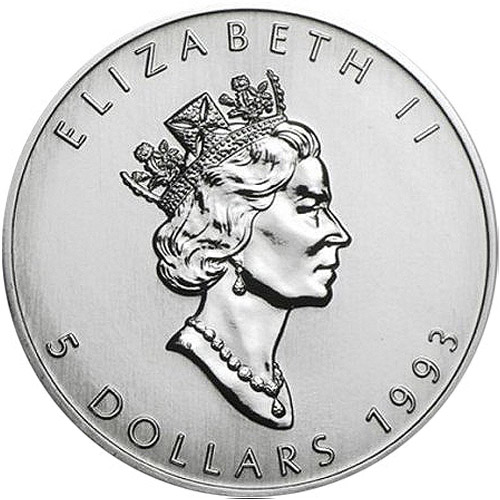 The Silver Maple Leaf hit a then-high mintage of 3.332 million coins in 1989 during its second year of issue, but it would be largely downhill from there for more than a decade. From 1989, the coins dropped in mintage through 1992 when the series hit its fourth-lowest mintage figure to date in program history.

With the release of the 1993 1 oz Canadian Silver Maple Leaf though, the Royal Canadian Mint experienced a respite from falling demand. The coins jumped to 1.133 million in mintage. This proved short-lived as mintage fell from 1994 to 1997, hitting an all-time low of 100,970 in that final year of the consecutive drops.

Canadian Silver Maple Leaf coins are struck by the Royal Canadian Mint as part of the larger Canadian Maple Leaf bullion series. Introduced as a gold coin in 1979, the RCM introduced these Silver Maple Leafs in 1988 followed by platinum and palladium versions of the coin which have experienced interruptions and/or changes in availability during their history of availability.

On the reverse of the 1993 1 oz Canadian Silver Maple Leaf Coin is the original design of the sugar maple leaf. Created in 1979 by Walter Ott for the Royal Canadian Mint, this image has subsequently featured on all four metallic versions of the Maple Leaf issued in the ensuing 40 years.

The obverse of these Canadian Silver Maple Leaf coins marks the fourth year that the third-generation portrait of Queen Elizabeth II featured on the Silver Maple Leaf. Created in 1990 by Dora de Pedery-Hunt, this design is a more regal depiction of the monarch and was in use from 1990 to 2002.

With a headquarters in the federal capital city of Ottawa and a secondary coining operation in Winnipeg, the Royal Canadian Mint is the official sovereign mint of Canada. The mint opened in 1908 and operated for nearly 80 years with only the Ottawa facility.

Please don’t hesitate to contact JM Bullion with your questions. Our customer service team is happy to help you on the phone at 800-276-6508, online using our live chat, and via our email address.