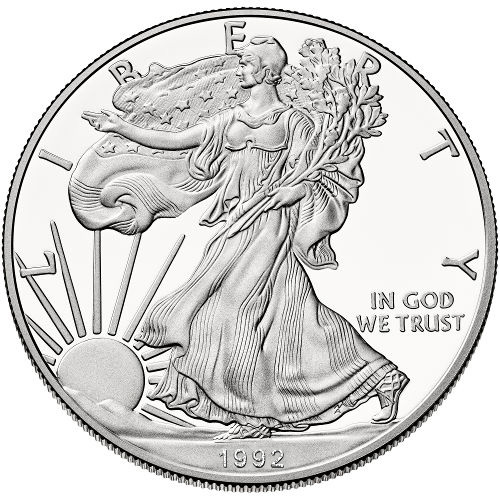 For the first time in four years, the American Silver Eagle experienced a decline in demand for both its bullion and proof versions in 1992. A growing American economy in the early 1990s saw demand for the coins among both investors and numismatists shrink, leading to lower mintage levels at the time and increased rarity of these specimens in the modern era. The 1992-S Proof American Silver Eagle coin is now available from JM Bullion with commemorative box and CoA included.

In 1992, American Silver Eagle demand and production slipped for both the bullion and proof versions of the coin. While the bullion coins dropped by 1.6 million, the proof versions saw a less severe dip from 511,000 in 1991 to 498,654 for 1992. This year marked the start of a general downward trend in the production of these coins through the end of the decade.

On the reverse is the heraldic eagle of the US, which was created by then-US Mint Chief Engraver John Mercanti. The image shows a bald eagle behind the nations heraldic shield, clutching arrows in one talon and an olive branch in the other. Common in American shields, the arrows represent a readiness for war while the olive branch signifies a desire for peace.

Please direct your questions to JM Bullion associates at 800-276-6508, chat with us live online, or email us.