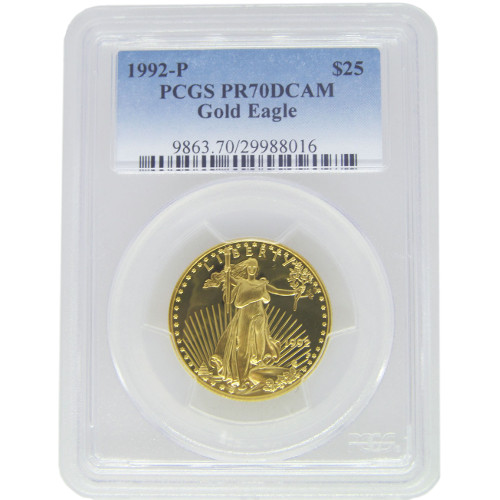 Across the greater American Gold Eagle series, the US Mint made a major adjustment in the date marks issued on its coins. Since the coins introduction in 1986, the US Mint had used Roman numerals, but in 1992 it switched to Arabic numbering.

Coins with a Deep-cameo finish have a unique visual appearance. The strong, frosted finish on the Liberty design give it hte impression of floating above the deeply-mirrored, clear background field.

On the obverse youll find the image of Liberty from Augustus Saint-Gaudens, and originally featured on the $20 Gold Double Eagle from 1907 to 1933. Meanwhile, the reverse features the family of nesting bald eagles from Miley Busiek. These two depictions have featured on the obverse and reverse of the coin since its 1986 introduction.