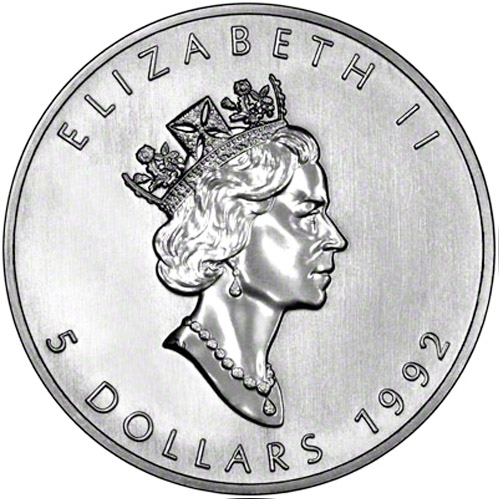 Canadas official bullion coin series features the design of the sugar maple leaf on the reverse face with each passing years issue. Debuting in gold in 1979, today the Canadian Maple Leaf Series consists of gold, silver, platinum, and palladium options. The Silver Maple Leaf was an innovative coin when it was released, and the 1992 1 oz Canadian Silver Maple Leaf Coin is currently available to you for purchase online from JM Bullion.

The reverse of the Canadian Silver Maple Leaf bears the sugar maple leaf, an international symbol of the nation of Canada since its foundation and used as imagery for the original French colonies of the region dating back to the 1700s. Engravings on this face include the nation of issue, purity, weight, and metal content of the coin.

Canadian Maple Leaf Coins are a product of the Royal Canadian Mint. Founded in Ottawa in 1907, today the RCM maintains minting operations in Ottawa and in the city of Winnipeg.

We encourage JM Bullion customers to reach out to us at 800-276-6508 with questions. You can also connect with us online through our live chat and email address.