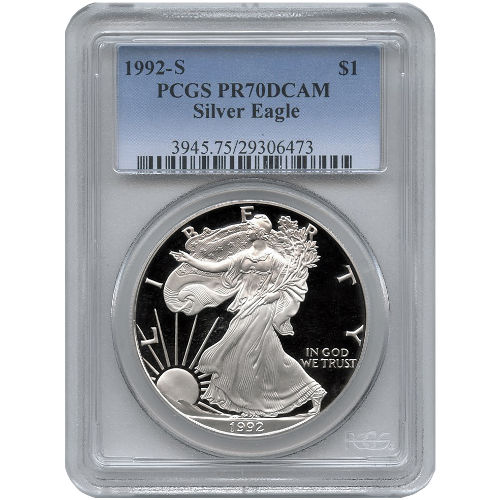 With a 30-year history, it is difficult to identify an individual mintage of the American Silver Eagle as unique. The proof version of the coin is the collector’s version of the nation’s bullion coin, and the 1992 mintage was a year that offered a unique identity to the program. Right now, the 1992-S Proof American Silver Eagle Coin is available in perfect condition from JM Bullion.

Each 1992-S Proof American Silver Eagle coin in this JM Bullion listing earned a PR70 grade from the PCGS. Coins in this condition exhibit full, original mint luster and bear no detracting flaws of any kind on the surface.

Deep-cameo, or DCAM, is a term used for proof coins that feature a finish that is exceptional in its visual quality. The design sets on this coin have a strong, frosted finish. The background field is dominated by a deeply-mirrored, clear finish. These aspects combine to give the coin’s design the image of floating above the background field.

The 1992 mintage year was special for the American Silver Eagle coin. Both the bullion and proof versions of the coin were originally struck in San Francisco, but 1992 marked the last year that the proof version of the coin would be struck in San Francisco. The proof coins were shifted to the Philadelphia Mint from 1993 to 2000, and are now produced at the West Point Mint.

On the obverse you’ll find the image of Walking Liberty, which was created in 1916 by Adolph A. Weinman. This depiction features the image of Liberty walking toward the setting sun, and is indicative of the nation’s desire for a brighter tomorrow. The reverse is dominated by the heraldic eagle of the United States, refined and modernized in 1986 by John Mercanti, then-Chief Engraver of the United States Mint.

If you have any questions, please feel free to reach out to JM Bullion at 800-276-6508. You can also connect with us online using our live web chat or email options. We also carry a large selection of other silver coins that you can compare by visiting our silver coin selection.