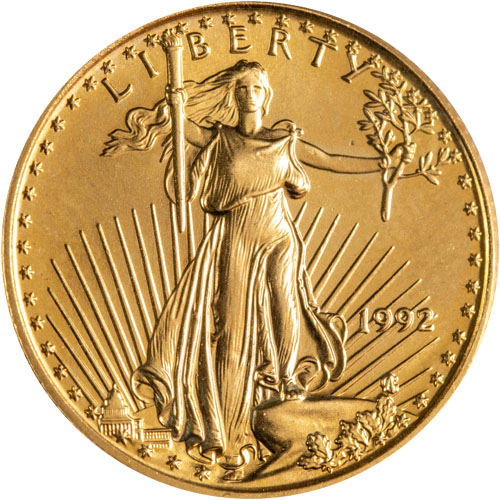 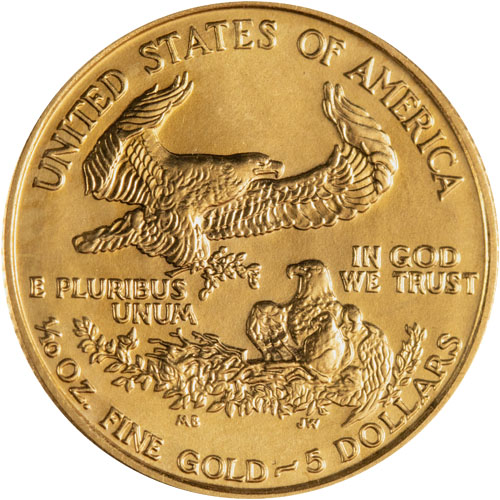 1992 is the seventh year of release for the American Gold Eagle coin series. Collectors and investors everywhere continue to love the exclusive releases from this series. Each year, the United States mint releases gold bullion products. This year, the mint features an increased mintage for the 1992 coin. Currently, the 1992 1/10 oz American Gold Eagle Coin is available for purchase from JM Bullion.

The 1992 1/10 oz American Gold Eagle Coin is an exclusive coin release for this series and was struck in 91.67% fine gold. This coin bears a value of five dollars and has been guaranteed by the government of the United States. With its unique obverse and reverse designs, this 1992-coin release is the perfect addition to any coin collection, especially with an uptick in mintage compared to previous releases in the series.

The American Gold Eagle coin collection was first introduced in 1986. Since then, the United States Mint has manufactured and distributed gold bullion products in this collection, with four different weight values available each year of release. All coins have been authorized under the American Eagle Bullion Program, meaning that investors have been able to easily purchase these bullion products every release year.

The obverse of the 1992 1/10 oz American Gold Eagle Coin shows an image of Lady Liberty originally designed by Augustus Saint-Gaudens. Lady Liberty holds a torch in one hand and an olive branch in the other, with both objects raised up in the air. Behind Lady Liberty, sun rays extend into the sky with the coins release year printed to the right. The obverse also shows the inscription LIBERTY printed above Lady Libertys head.

On the reverse of the 1992 1/10 oz American Gold Eagle Coin is an eagle family designed by Miley Busiek. An adult male eagle is seen bringing a branch to a female eagle and its hatchlings, both of which are nestled in the nest. The reverse also shows the coins weight, purity, and value, along with three different inscriptions: UNITED STATES OF AMERICA, IN GOD WE TRUST AND E PLURIBUS UNUM.

When ordering from JM Bullion, please reach out to our customer service team if you have any questions about the 1992 1/10 oz American Gold Eagle Coin. We can be contacted via email, online live chat, or by phone at 800-276-6508.