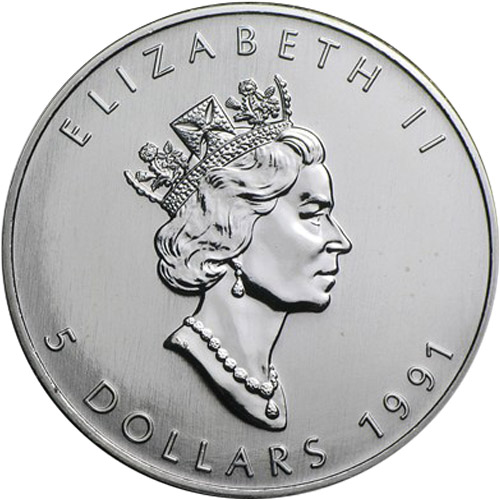 With the 1991 release of the Canadian Silver Maple Leaf, the Royal Canadian Mint witnessed the declining demand for silver play out in the mintage figure of its Silver Maple Leaf coin. Like its neighbor to the south, the American Silver Eagle, demand was slipping for silver bullion coins in the early 1990s.

The reverse of the 1991 Silver Maple Leaf continues the use of Walter Otts original Maple Leaf design. Using the sugar maple leaf, the nations official symbol, as his inspiration, Ott developed this design in 1979 for the Gold Maple Leaf. The Royal Canadian Mint has used it since that time on all metallic versions of the coin from these Silver Maple Leafs to the platinum and palladium options.

Please feel free to reach out to JM Bullion with your questions. You can reach us on the phone at 800-276-6508, chat with us live online, or simply send us an email.