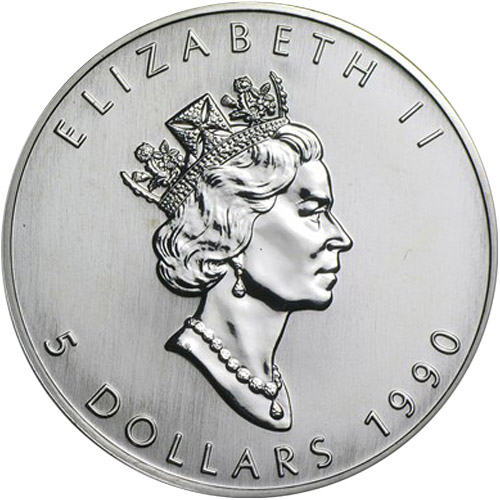 The 1990 release of the Canadian Silver Maple Leaf Coin from the Royal Canadian Mint brought the first change in imagery to the silver version of the coin. Though the obverse and reverse design motifs never change, the effigy of Queen Elizabeth II is updated routinely to reflect her age. Today, 1990 1 oz Canadian Silver Maple Leaf Coins are available to you online from JM Bullion.

During her reign as Queen of England, Elizabeth II has had her image featured on the reverse of all Canadian coinage in four different portraits. Each one is designed to reflect her at a given age during her long reign. The first-generation portrait captured her at age 27 and was in use on Canadian coins for the shortest period of time, from 1953 to 1964.

When the Canadian Maple Leaf coins debuted in 1979 with a gold coin for sale, the second-generation effigy from Arnold Machin was the design in use. This image ran on Canadian coins from 1965 to 1989, encompassing the first decade of the Gold Maple Leaf’s issue and the first two issues of the Canadian Silver Maple Leaf.

For the 1990 1 oz Canadian Silver Maple Leaf coin, a new portrait of the Queen was used for the first time in the silver bullion collection. It was a significant design for many reasons. First and foremost, it is arguably the most regal of the designs to feature with the Queen wearing a larger crown, necklace, and earrings. It was also the first design from a Canadian artist.

On the obverse of 1990 1 oz Canadian Silver Maple Leaf Coins is the right-profile portrait of Queen Elizabeth II. Capturing Britain’s monarch at the age of 64, this effigy was designed by Dora de Pedery-Hunt. Hunt was the first Canadian artist to complete the Queen’s portrait on Canadian coins and retained the use of “D.G. Regina” in the inscription on the obverse over the previous “Dei Gratia Regina.”

The reverse of Canadian Silver Maple Leaf Coins features the sugar maple leaf. A symbol of the Canadian nation known internationally, this image has been on Canadian Maple Leaf coins since the 1979 release of the Gold Maple Leaf and includes engravings of the nation of issue, purity, metal content, and weight of the coin.