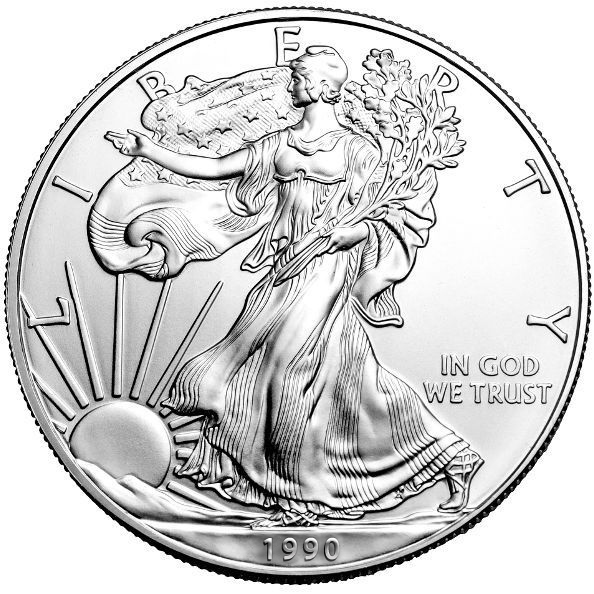 By the time the 1990 American Silver Eagle coin was released, the program had rebounded to a total mintage of 6.5 million coins. The program saw increases in demand in both 1989 and 1990, a trend that continued into 1991.

Of the 6.5 million coins struck in 1990, 5.8 million of those were bullion coins, a slight increase of 600,000 from the previous year. The proof American Silver Eagle in 1990 experienced a surge to 695,510 coins. This was the highest mark the program would see in proof production until 2001.

On the obverse is the iconic image of Walking Liberty from Adolph A. Weinman. His depiction of Liberty represented the nation’s drive toward a brighter future, and featured on the Walking Liberty Half Dollar from 1916 to 1947.

The reverse bears the image of the heraldic eagle of the United States. Originally used as early as 1793 by the US Mint, this particular version was refined and modernized by John Mercanti, the United States Mint’s Chief Engraver from 1986 to 2010.

If you have any questions, please don’t hesitate to ask. Our associates at JM Bullion are available via the phone at 800-276-6508, online using our live web chat, and via our email address. You may also enjoy viewing the 2014 American Silver Eagle. This is a superior coin and we look forward to assisting you make your order or to answer any questions you may have.