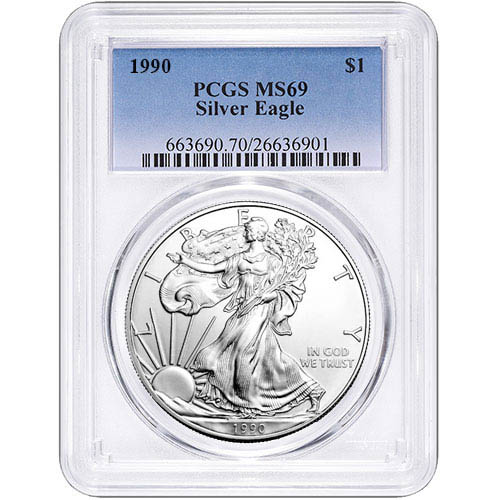 1990 American Silver Eagle coins had a mintage of 5,840,110 coins. That figure was the highest in the series since the 11.4 million coins issued in 1987 and marked a second consecutive year of increased demand. There were nearly 640,000 more 1990 Silver Eagles issued compared to the 1989 coin.

Silver prices during 1990 were lower again at an average of $4.83 per ounce throughout the year. The price of silver bounced around significantly during the year with a low of $3.95 per ounce and a high of $5.35 per ounce.

On the obverse side of 1990 1 oz American Silver Eagle Coins is Walking Liberty. Designed by Adolph A. Weinman in 1916, this image of Liberty appeared on the nation’s half-dollar coin from 1916 to 1947. The design was highly regarded during its time and is remembered today as one of the two finest American coin designs of the 20th century.

Each of these 1990 1 oz American Silver Eagle Coins come to you with a PCGS certification. Mint State 69 coins are considered near-perfect specimens and feature full, original mint luster with a maximum of two minor detracting flaws. Examples of acceptable flaws on the coins include minuscule contact marks or hairlines.

The American Silver Eagle bullion coins were struck by the San Francisco Mint from 1986 to 1998, though you’ll find no mint marks on the bullion versions of the coin.