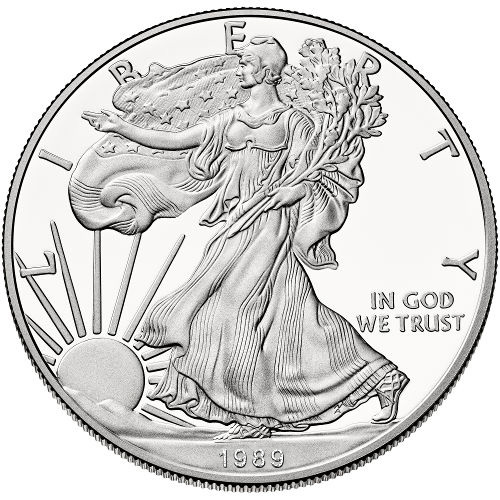 Prior to the 1986 release of the American Silver Eagle, the United States Mint did not have a silver bullion coin recognized around the world by numismatists. As such, the US Mint was careful to select an image for the obverse that would convey American majesty and power, and brushed the dust off an image not seen on American coins in 39 years.

Walking Liberty was last seen on the Walking Liberty Half Dollar in 1947. Created and introduced in 1916 by Adolph A. Weinman, it is considered one of the two finest American coin designs of all time. It was chosen as the primary design image of the new American Silver Eagle.

During the early production years of the American Silver Eagle, demand and mintage remained relatively steady, following and up-and-down pattern that typically saw its numbers stay within the same range 5 to 7 million coins annually. 1989 marked the second year of a four-year increase in production, with Proof American Silver Eagles jumping slightly from 557,000 coins to 617,000.

On the obverse is that beautiful image of Walking Liberty created by Weinman. It appeared on the Walking Liberty Half Dollar from 1916 to 1947. The reverse features the heraldic eagle of the United States, as crafted by then-US Mint Chief Engraver John Mercanti. The American Silver Eagle design was his first as Chief Engraver for the US Mint.

Please direct any questions you might have about this 1989-S Proof American Silver Eagle to a JM Bullion associate. Were available on the phone at 800-276-6508, online using our live chat, and via email.