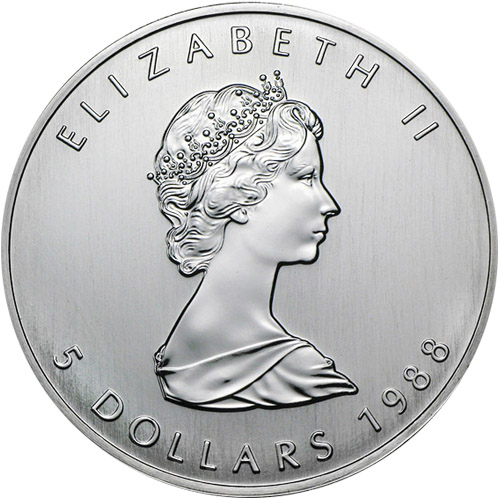 The most significant release of any silver bullion coin program is always the first. Other years might have higher mintage figures or bear significance as anniversary issues, but the first year will always be just that: the very first. The Canadian Silver Maple Leaf debuted in 1988, and JM Bullion currently offers the 1988 1 oz Canadian Silver Maple Leaf Coin to you for purchase online in BU condition.

Canadian Maple Leaf coins debuted in 1979 as the second-ever modern bullion coins on the market behind the South African Gold Krugerrand. The Maple Leaf Series expanded in 1988 with this debut issue of the Canadian Silver Maple Leaf.

On the obverse of the 1988 Canadian Silver Maple Leaf is the right-profile portrait of Queen Elizabeth II. These coins feature the second-generation effigy of the Queen to appear on Canadian coinage. Created in 1965 by Arnold Machin, this design captured a demure and soft depiction of Queen Elizabeth II and was the first to featured shortened inscriptions. Previous issues bore the full engravings of Elizabeth II and Dei Gratia Regina, which translates from Latin as Elizabeth II, by the grace of God, the Queen. The Machin design of 1965-1989 featured a shortened D.G. Regina instead.

All Canadian Silver Maple Leafs are produced by the Royal Canadian Mint. Founded in 1908, the RCM operated only a single mint location in Ottawa until 1980, at which point the Winnipeg location opened to expand coinage capacity.

We encourage JM Bullion customers to reach out to us with questions. You can call us at 800-276-6508, or connect with us online through our live chat and email address.