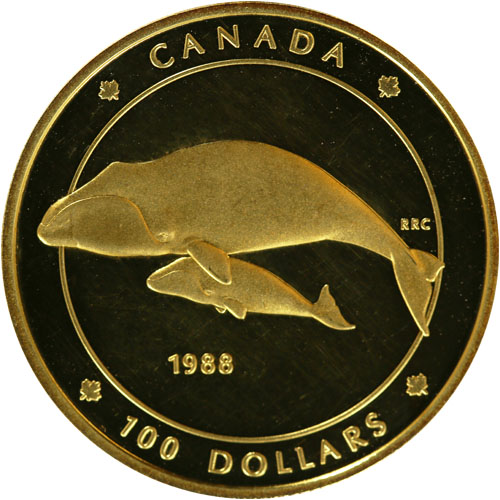 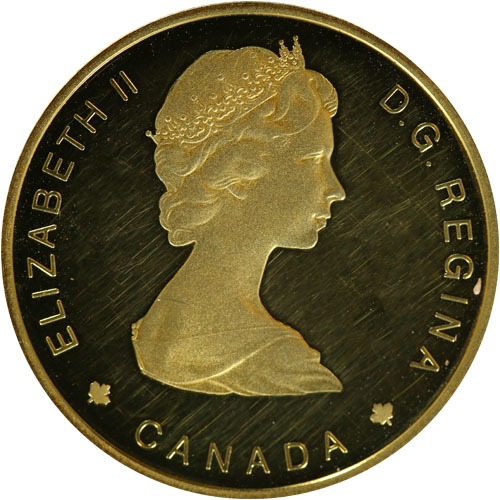 A protected species, the bowhead whale is considered a national treasure to many in Canada, including the indigenous cultures that live near the coasts. The Royal Canadian Mint released a proof gold coin in 1988 honoring the protected whales. Right now, 1988 $100 Proof Canadian Gold Bowhead Whale Coins are available to purchase online from JM Bullion.

A species of baleen whale, the bowhead whale belongs to the family Balaenidae and is the only living member of its genus, Balaena. The bowhead whales are the only member of the species native to Arctic and subarctic waters. The species is named for the large, triangular skulls of the creatures. This triangular skull is used to break through Arctic ice when surfacing for fresh air.

Queen Elizabeth II is on the obverse of 1988 $100 Proof Canadian Gold Bowhead Whale Coins. This effigy of the Queen is just the second to ever feature on Canadian coinage during her reign. Designed by Arnold Machin, it was used from 1965 to 1989. This portrait of a young Queen Elizabeth II is a right-profile effigy wherein the Queen wears her favored Girls of Great Britain and Ireland Tiara.

A bowhead whale and its young calf are shown swimming alongside one another on the reverse of the 1988 Proof Canadian Gold Bowhead Whale Coins. The breeding season for the bowhead whale runs from March to August. Bowhead whales reach sexual maturity between 10 to 15 years of age and the gestation period for the female is 13-14 months.

The Royal Canadian Mint is the official sovereign mint of Canada. The mint opened in 1908 with the founding of the Ottawa Mint that year as a branch of the Royal Mint of England responsible for coining currency for the Dominion of Canada.

If you have any questions about gold coins for sale, please feel free to ask. JM Bullion customer service is available to you at 800-276-6508, online using our live chat, and via our email address.