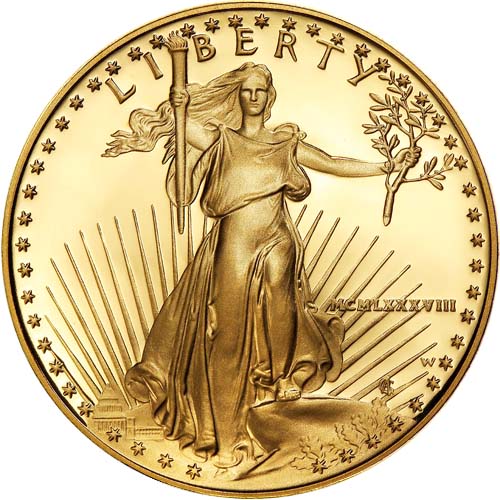 When it was introduced in 1986, the American Gold Eagle coin from the United States Mint changed the course of minting history that had been the same since the 1830s. Prior to its release, the US Mint struck only .900 gold coins going back to at least 1837, with some denominations featuring crown gold alloys as far back as 1832. Right now, the 1988 1 oz American Gold Eagle Coin is available to purchase online at JMBullion.com.

The third release of the American Gold Eagle one ounce coin was met with much less enthusiasm among investors by 1988. Many bullion and proof programs suffer lags in production and demand after the first year as the market adjusts to its presence. After a debut well in excess of 1 million in 1986, demand had been cut in half by 1988.

Part of the drop in popularity was a rise in the variety of proof American Gold Eagles available by 1988. While the bullion coin had been released with all four weights available in 1986, the proof version had only a one ounce coin. By 1988, the 1/2 oz fractional had been introduced along with the 1/4 oz and 1/10 oz coins.

Each 1988 1 oz American Gold Eagle Coin in this product listing is in BU condition. Coins in this condition exhibit no signs of wear and tear, though you may notice minor flaws including breaks in the luster, spotted surfaces, and contact marks from the coining process.

On the obverse of the American Gold Eagle coin is the image of Liberty created in 1907 by Augustus Saint-Gaudens. The Irish-American artist had been commissioned by President Theodore Roosevelt directly to develop a new design for American gold coinage, and this depiction of Liberty striding confidently forward into an unknown future was the result.

The reverse of all 1988 American Gold Eagle coins features a design known as the family of nesting bald eagles. It depicts a female bald eagle watching steadfastly over a nest that contains young hatchlings. Flying overhead is a male bald eagle with an olive branch in its talons. This design was created in 1986 by Miley Busiek specifically for these coins.

If you have any questions about the 1988 1 oz American Gold Eagle coins, please don’t hesitate to contact JM Bullion. Our customer service team is available on the phone at 800-276-6508, or you can find us online using the live chat feature on our website or by simply sending us an email with your inquiries.