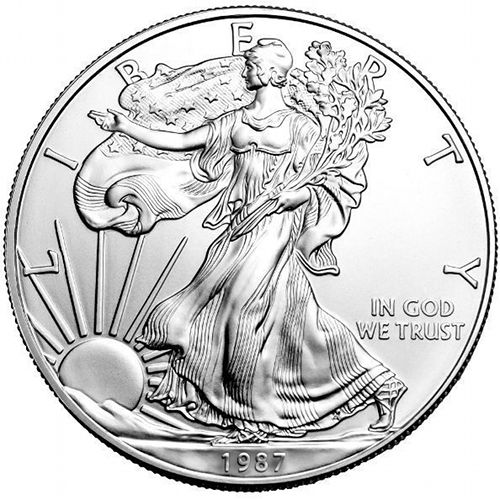 American Silver Eagle coins proved immensely popular right out of the gate in the 1980s. There were a total of 6.8 million coins struck in 1986 when the coins were introduced, and they proved so popular that the 1987 mintage numbers shot up to record levels that stood until the mid-2000s.

There were a total of 11.44 million bullion coins struck, which was more than double 1986. The proof coins slipped from 1.44 million in 1986 to 904,732 for the 1987 American Silver Eagle. However, both figures marked high-water points for the series.

On the obverse youll find the image of Walking Liberty from Adolph A. Weinman. His image of Liberty depicts her as she walks toward the setting sun with her right arm outstretched and the American flag draped across her body.

The reverse features the heraldic eagle of the United States. This design includes an American bald eagle set behind the nations heraldic shield, clutching arrows in one talon as a sign of preparedness for war and an olive branch in the other signaling peace.

If you have questions, dont hesitate to ask JM Bullion. Our associates are available on the phone at 800-276-6508, online using our live chat, and via email. Our website offers other grades and editions of this particular coin as well as other non coin products. Be sure to check back regularly for any new merchandise.