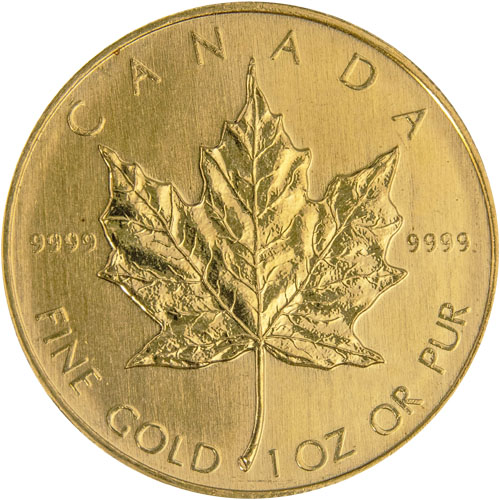 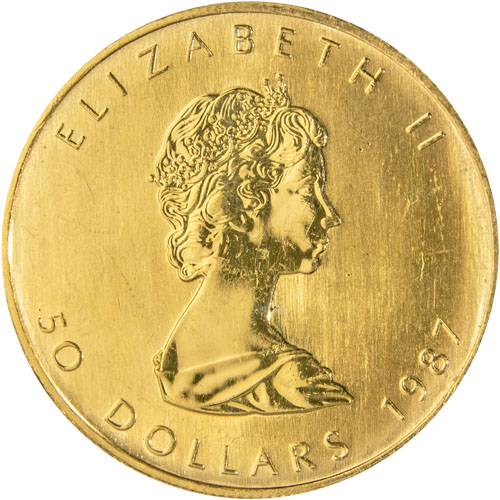 Nearing the end of its first decade in production, the Canadian Gold Maple Leaf Coin entered a period of sustained declines in demand for the coins. What started in 1987 would culminate in an early low point for the series within the next decade as the series hit a mintage of just 143,000 coins in 1996. Now, 1987 1 oz Canadian Gold Maple Leaf Coins are available to you for purchase online from JM Bullion.

In 1979, the Royal Canadian Mint offered the 1 oz Canadian Gold Maple Leaf Coin to investors for the first time. Offered as an alternative to the South African Gold Krugerrand, a coin series that had been available as the only gold bullion coin since 1967. With economic sanctions and boycotts looming for South Africa in the late 1970s and 1980s, other nations began to introduce new gold bullion coins.

Queen Elizabeth II is on the obverse of 1987 Canadian Gold Maple Leaf Coins. Her Majesty is shown here in right-profile relief in the 1964 design from Arnold Machin. The Royal Canadian Mint used this design from 1979 to 1989 on the Gold Maple Leaf and it features the Queen at the age of 39.

A sugar maple leaf is featured in the reverse design of the 1987 1 oz Gold Maple Leaf Coin. This image of the national emblem is shown on the reverse of all coins in the series, from the gold and silver coins to the platinum and palladium coins. This design was created in 1979 by Walter Ott.

These 1987 1 oz Canadian Gold Maple Leaf Coins are available for purchase with protective plastic flips. The mintage of 978,000 coins was the first below 1 million since 1983 and the highest the series would see until 2001.

JM Bullion customer service is available to you at 800-276-6508. Our team is also available online through our live chat and email address features.