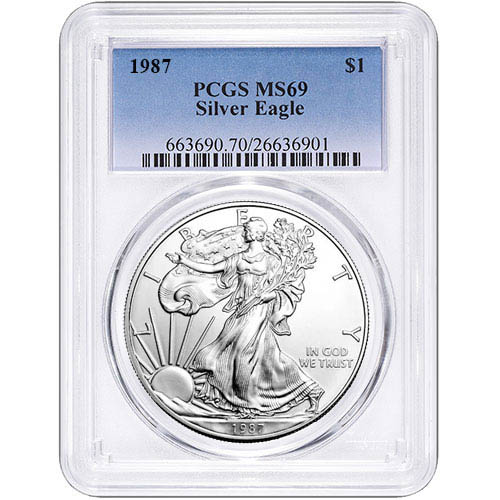 When the American Silver Eagle coins debuted in 1986, the US Mint offered the coins for sale only during the final two months of the year as coining did not begin until October 29, 1986. The coins went on sale in late November but still managed an impressive 5.3 million in sales. The 1987 American Silver Eagle marked the first year in which the coins were available for sale throughout an entire year.

1987 1 oz American Silver Eagle coins had a total mintage of 11,442,335 units. That was a significant jump compared to the 1986 release, due in large part to its limited time of issue during the previous year. The 1987 Silver Eagles mintage of 11.442 million coins remained the record in the series for two full decades. It wasnt until the 2008 Silver Eagle sold a total of 20.583 million coins that the mark was surpassed.

On the obverse of 1987 American Silver Eagle Coins is the image of Walking Liberty. Designed by Adolph A. Weinman, it features Liberty walking toward the sun on the horizon with the American flag over her shoulders, her right hand outstretched, and her left hand holds the oak and laurel branches.

The reverse of 1987 1 oz Silver Eagles features the heraldic eagle of the United States. The bird is set behind the national shield with a triangular cluster of 13 stars above its head. These stars represent the original American Colonies that formed the new nation after the Revolutionary War.

All of these 1987 1 oz American Silver Eagle coins are available with Mint State 69 certifications from the PCGS. Coins in this condition have full, original mint luster with no more than two minor detracting flaws present. Acceptable flaws at this level include only minuscule contact marks and hairlines.

We encourage JM Bullion customers to contact us with questions at 800-276-6508. You can also reach out to us online using our live chat and email address features.