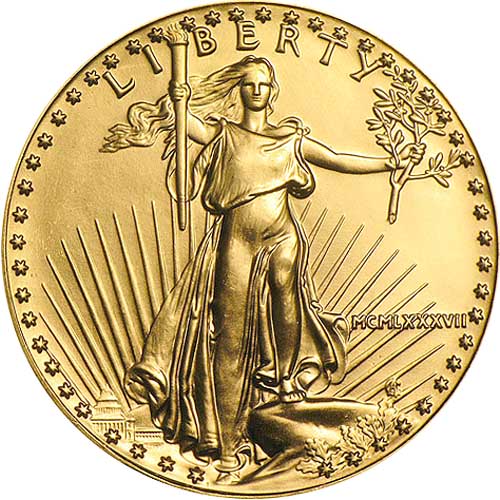 This year marks the second year for the release of the American Gold Eagle coins. Available in 4 different weights – 1 oz, 1/2 oz, 1/4 oz, and 1/10 oz. – these coins are in BU condition. Thus there are no signs of wear and tear, and only minor flaws may be noticeable. The Gold Eagles are guaranteed by the US government to contain the stated amount of actual gold weight in troy ounces. Even though the 1987 Gold Eagles were available for the entire year (as compared to 1986, where they were available for just 3 months), the mintage numbers of the 1987 Gold Eagles dropped off significantly from 1986. The 1/2 oz Gold Eagles again had the smallest mintage numbers of the 4 weights in 1987, at 131,255. Right now, JM Bullion has the 1987 1/2 oz American Gold Eagle Coin available for purchase.

President Theodore Roosevelt chose Irish-born Augustus Saint-Gaudens to redesign the nation’s coinage at the beginning of the 20th century. President Roosevelt had become unhappy with the artistic appearance of US coinage and wanted a design that would rival the ancient Greek and Roman coins. The original Lady Liberty design that Saint-Gaudens created was on an ultra high-relief $20 gold piece. The ultra high-relief coin required too many strikes, so the US Mint ultimately modified it to a normal-relief version, which then appeared on the Double Eagle ($20) gold coins, minted from 1907 to 1933. It is a version of this Lady Liberty that was repurposed to appear on the American Gold Eagle coins.

The obverse of the American Gold Eagle coin is the Augustus Saint-Gaudens created full-length figure of Lady Liberty. As you glance at the coin, Lady Liberty is walking directly at you. Her outstretched right hand is holding a torch while she carries an olive branch in her left hand. Her hair is flowing in the breeze. At the bottom of the coin, to the left of her right foot, is a depiction of the Capitol building.

The reverse of the American Gold Eagle coin is a male eagle, carrying an olive branch, flying back to the family nest. In the nest is a female eagle, guarding a couple of eaglets. This design symbolizes the importance of family in America. It was created by Miley Busiek and sculpted by Sherl J. Winter.

If you want more information about the Gold Eagle coins, please contact our JM Bullion Customer Service team, as we will be happy to help. We can be reached via phone at 800-276-6508, via our live chat, or via our email.