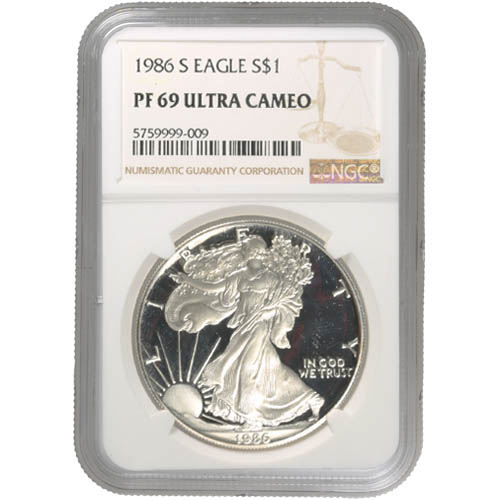 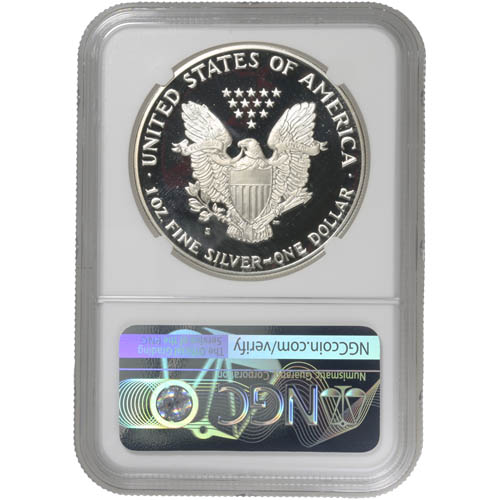 Each 1986-S Proof American Silver Eagle coin in this listing comes to you in near-perfect condition according to the NGC. Coins with a PF69 certification exhibit full, original mint luster with a maximum of two minor detracting flaws found only outside the primary focal areas. Examples of these flaws include minuscule contact marks or hairlines.

The included UCAM label stands for ultra-cameo. An available designation for proof coins only, UCAM identifies a coin as having strong, frosted matte design elements and deeply-mirrored, clear background fields.

On that reverse field of the 1986-S Proof American Silver Eagle is the heraldic eagle of the United States. Originally designed in 1794 by Robert Scot, the 1st Chief Engraver of the United States Mint, this iconic seal has been modified throughout two centuries of coining history. This modified version was created by John Mercanti in 1986 and includes a triangular cluster of 13 stars above the seal.

The obverse of 1986 Proof American Silver Eagle coins includes the Walking Liberty design. This was created in 1916 by Adolph A. Weinman and appeared on the half-dollar coin until 1947. It depicts Liberty’s full figure in left-profile relief as she marches toward the sun on the horizon.

If you have any questions, please feel free to reach out to JM Bullion. You can call us on the phone at 800-276-6508, chat with us live online, or email us directly.