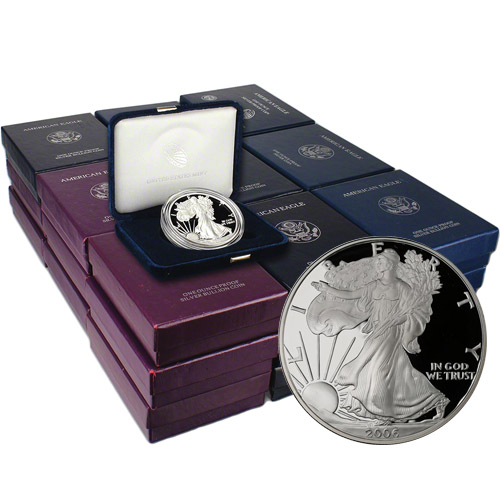 Proof American Silver Eagle coins are available only in 1 oz silver from the United States Mint. Overall, the Silver Eagle consists of bullion, proof, and burnished options for silver investors and collectors. While the bullion and proof coins are issued annually, the proof coins do have one gap in production since 1986.

You’ll find that there are no 2009 coins in this 1986-2018 Proof American Silver Eagle 32-Coin Set. Under the legislation that authorized the Silver Eagle collection, the US Mint is obligated to strike the bullion version of the coin each year without fail. In the midst of the Great Recession and surging silver demand in 2009, the US Mint had to halt production of the Proof Silver Eagle for the year to ensure that enough blanks were available to produce the bullion versions of the coin.

On the obverse of each Proof American Silver Eagle coin listed here is the image of Walking Liberty. Designed in 1916 by Adolph A. Weinman, it was originally used on the half-dollar coin until 1947. The image features Liberty walking toward the setting sun chasing the brightness of a new day. She has the American flag wrapped around her shoulders and one hand outstretched to the horizon.

The reverse includes the image of the heraldic eagle of the United States. This design has been used on American coins since 1794, but this particular image is a 1986 modernization of the seal completed by John Mercanti.

In this set, you’ll receive a total of 32 individual Proof American Silver Eagle coins. As mentioned earlier, there is one coin from each release year from 1986 to 2018 with the exception of 2009. The set is boxed for storage and includes a Certificate of Authenticity.

We encourage JM Bullion customers to call us at 800-276-6508 with questions. You can also connect with us live online through our chat service or send us an email.