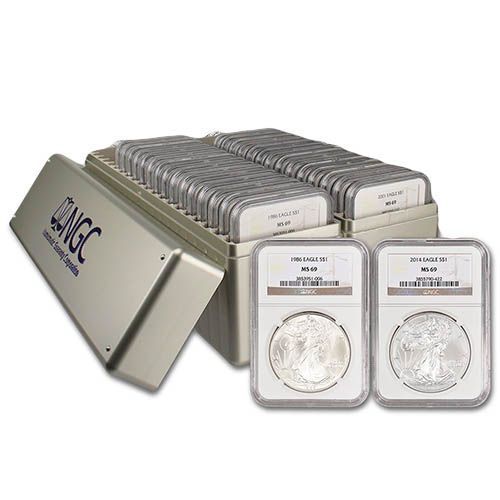 Disclaimer: This coin set may or may not ship in a tin box.

American Silver Eagle coins are one of the top investment-grade bullion coins on the market. Millions of these specimens are struck each year, and demand for the coins presses United States Mint into near-round-the-clock production. In this special listing, you can purchase all 33 issue dates of the American Silver Eagle released since its debut! Right now, the 1986-2018 American Silver Eagle 33-Coin Set is available to purchase online from JM Bullion.

Each of the individual American Silver Eagle coins in this listing has been separately graded as a Mint State 69 coin by the NGC. Coins with an MS69 grade exhibit full, original mint luster with a maximum of two detracting flaws. These flaws are limited in scope to minuscule hairlines or contact marks, and limited in range to the areas outside the primary focal points of the coin design.

This listing from JM Bullion offers you the chance to purchase a total of 33 American Silver Eagle coins. Included in the packaging is one coin from each year of issue dating from the 1986 debut of the coins to the 2018 release of the Silver Eagle.

On the obverse of all American Silver Eagle Coins is Adolph A. Weinman’s depiction of Lady Liberty. Known as Walking Liberty, it depicts Liberty as she walks toward the setting sun. She carries the oak cluster and olive branches symbolizing peace and civic achievement in her left hand, while holding out her right hand to guide the country. The American flag is draped over her shoulders.

The reverse of all Silver Eagles includes John Mercanti’s heraldic eagle. Used on coins since 1794, this depiction of the heraldic eagle was modernized by Mercanti in 1986 for use on the American Silver Eagle coins. Mercanti was a US Mint engraver at the time and would later serve as Chief Engraver of the United States Mint until his 2010 retirement.

If you have any questions about this listing, please contact JM Bullion. Our customer service team is available at 800-276-6508, online via our live chat, and through our email address.