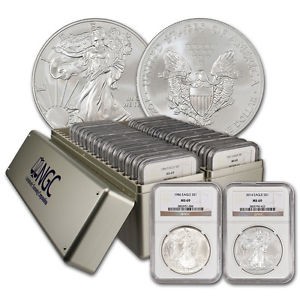 Disclaimer: This coin set may or may not ship in a tin box.

The American Silver Eagle coin is the worlds most popular silver bullion product. Introduced by the United States Mint in 1986, this silver coin program has shot to unbelievable heights in the years following the onset and easing of the Great Recession. Right now, you have the unique chance to purchase a 32-coin set of American Silver Eagle Coins with an NGC certification level online from JM Bullion.

Each of the individual American Silver Eagle coins in this 32-coin set has a near-perfect certification from the NGC. Coins with an MS69 grade exhibit full, original mint luster, but also have two minor detracting flaws that are limited in scope to miniscule contact marks or hairlines, and limited in range to the surface areas outside the primary focal zones.

Designs for the American Silver Eagle coins come from American history and some of the nations most iconic coinage features. The heraldic eagle of the United States first debuted on American coinage from the Philadelphia Mint in 1794, and has been updated routinely over time to modernize its appearance.

On the reverse of all Silver Eagles in this 32-coin set youll find John Mercantis latest depiction of the heraldic eagle of the United States. Mercanti was the Chief Engraver of the United States Mint from 1986 to 2010 when he retired, and his creation features the bald eagle set behind the nations heraldic shield as it clutches arrows in one talon and an olive branch of peace in the other.

Walking Liberty is featured on the obverse of all American Silver Eagle coins. She is shown walking toward the setting sun with her right hand outstretched and the American flag draped over her shoulders. In her left hand she carries the bundles of oak and laurel, signifying the nations military and civic prowess.

If you have any questions, please contact JM Bullion. Our customer service is available to you at 800-276-6508, on the web using our live chat, and via our email address.