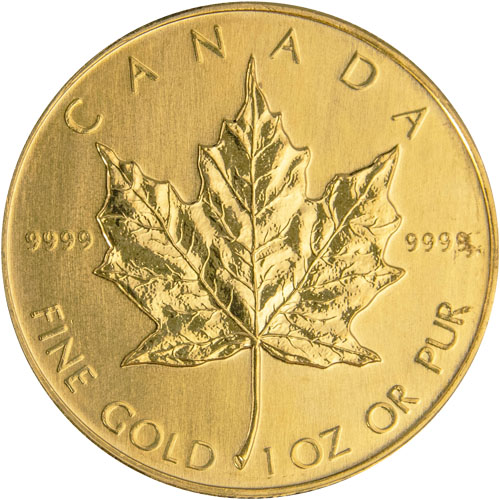 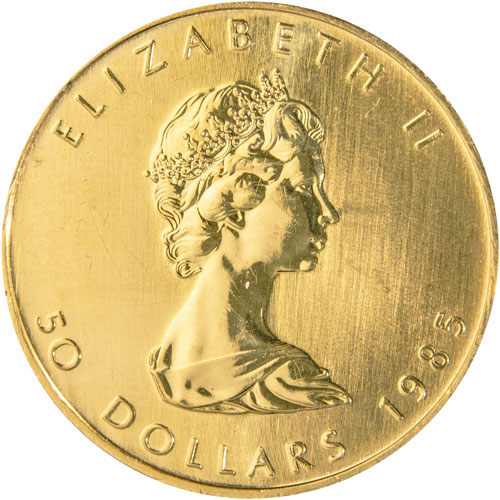 Canadian Gold Maple Leaf Coins have been available to investors since 1979. When the series first started, it offered only a 1 oz gold coin to investors. Starting in 1982, and continuing through 2014, the Royal Canadian Mint expanded the series to feature other weights. However, the 1 oz gold coin remains the most popular. Today, 1985 1 oz Canadian Gold Maple Leaf Coins are available to you online from JM Bullion.

The Royal Canadian Mint first released the Canadian Gold Maple Leaf in 1979 when it saw an opening as a result of Western economic sanctions against South Africa. At the time, Western nations were seeking to use economic measures to push South Africa to abandon its apartheid system. As such, the South African Gold Krugerrand was targeted and the coins were harder to find for Western investors. The first 1 oz Canadian Gold Maple Leaf was issued in 1979 and would later be joined by 1/2 oz, 1/4 oz, 1/10 oz, 1/20 oz, and 1 Gram coins.

All of these 1985 1 oz Canadian Gold Maple Leaf Coins come with an individual plastic flip. The coins issued in 1985 experienced the highest demand in the history of the series. With sales of 1.747 million coins, no date mark as of 2022 has experienced higher demand. In fact, the 1985 coin was issued during a period of strong demand that saw the 1986 and 1984 coins also land among the five-highest mintages in the history of the series.

On the obverse of 1985 Canadian Gold Maple Leaf Coins, you will find an image of Queen Elizabeth II. In this design, Her Majesty is featured in right-profile relief in a design that was created by Arnold Machin in 1964. It debuted on Canadian coins in 1965 and is just the second effigy of the Queen to appear on Canadian coins during her right.

The reverse side of the 1985 1 oz Gold Maple Leaf Coin comes with a depiction of the sugar maple leaf. This design has remained the same on the reverse of Gold Maple Leafs since 1979 and was created by Walter Ott.

Please contact JM Bullion if you have any questions about these coins. You can call us at 800-276-6508, chat with us live online, or email us directly.