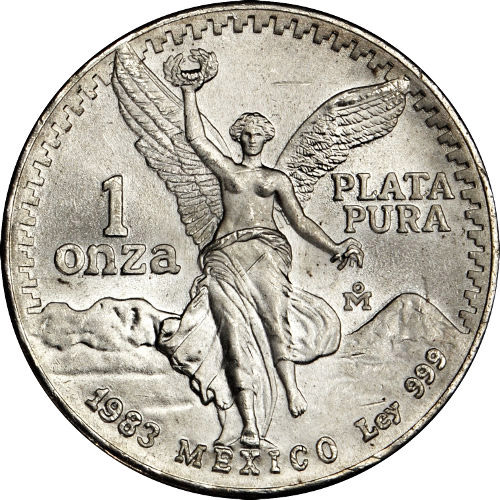 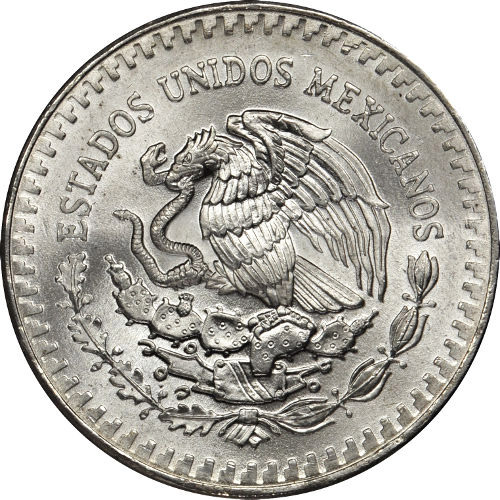 As the nation of Mexico celebrated the centennial of its War of Independence in 1920, the government erected a statue of Winged Victory in the central square of Mexico City. The image of Mexico’s angel of independence was then featured on the gold Centenario coin, struck by the Mexican Mint between the 1920s and 1950s.

The angel of independence is representative of Mexico’s success in breaking free from Spanish colonial rule. In her right hand, she holds a wreath crown over her head. In her left hand, she holds the chains of bondage that symbolize the nation’s newfound freedom.

On the obverse side of each 1983 1 oz Mexican Silver Libertad is the image of Winged Victory. Her full-length figure is visible in the foreground, while the volcanic peaks of Popocatepetl and Iztaccihuatl rise toward the skies in the background. Engravings on this side include “1 Onza,” “Plata Pura,” 1983 Mexico Ley 999,” and the mint mark of “MO.”

The reverse side of each coin features the national seal of Mexico. Also known as the nation’s coat of arms, the image includes a bald eagle locked in battle with a serpent. The eagle is perched atop a cactus branch, with the engravings of a wreath and the phrase “Estados Unidos Mexicanos” surrounding the seal.

The Mexican Mint was founded in 1535, and strikes the Mexican Silver Libertad coin each year under the authority of the Banco de Mexico. If you have questions about these coins, please contact a JM Bullion associate at 800-276-6508, connect with us online via live chat, or send us an email. If you are interested in similar products, be sure to visit our Mexican Silver Libertads page.