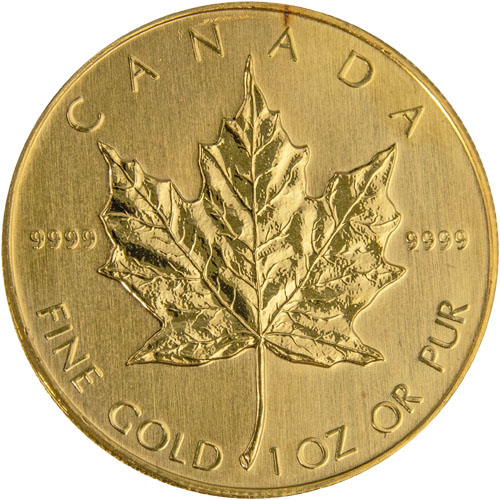 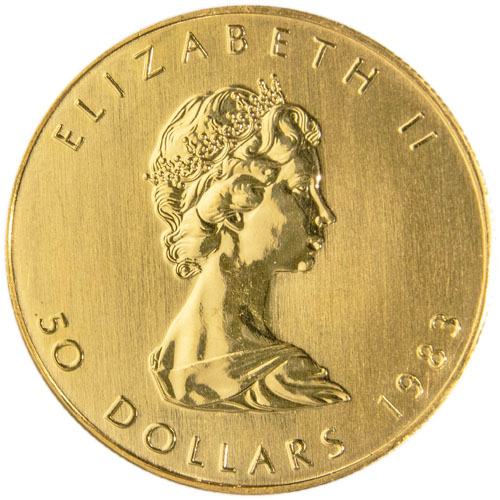 In 1983, the Canadian Gold Maple Leaf Coin Series was in just its fifth year of availability. Notably, this year marked the first full year of availability for both the 1 oz gold coins with .9999 purity in the metal content and the first full year of issue with fractional-ounce coins in the series. Now, 1983 1 oz Canadian Gold Maple Leaf Coins are available to you for purchase online from JM Bullion.

When the Royal Canadian Mint introduced the Canadian Gold Maple Leaf Coins in 1979, there was only a 1 oz gold coin offered with .999 fineness. In November 1982, the series experienced its first changes. This included enhancing the fineness of the coins from .999 to .9999 purity and introducing new weights.

Queen Elizabeth II is on the obverse side of the 1983 Canadian Gold Maple Leaf Coins. This effigy of the Queen is the second-generation portrait of Elizabeth II to grace Canadian coins. Originally created in 1964 by Arnold Machin for the Royal Mint, it was adopted on Canadian Gold Maple Leafs when the series debuted in 1979 and would continue to feature on the coins through 1989. It depicts the Queen in right-profile relief at the age of 39.

A sugar maple leaf is featured in the reverse design element of 1983 1 oz Gold Maple Leaf Coins. This design was created for this series in 1979 by Walter Ott. It has gone on to feature on all versions of the Canadian Maple Leaf bullion series, from the gold and silver coins to the platinum and palladium bullion coins.

These 1983 1 oz Canadian Gold Maple Leaf Coins are available to you for purchase with plastic flips. The mintage of 695,000 coins in 1983 is among the mid-range mintage figures in the history of the series. While it is well above the all-time low of just 86,375 coins, it is more than 1 million coins below the highest mintages.

JM Bullion customer service is available to assist you at 800-276-6508 with questions about gold for sale. You can also chat with us live online or email us directly.