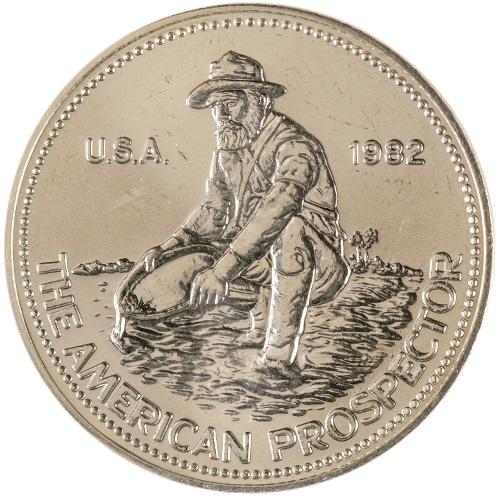 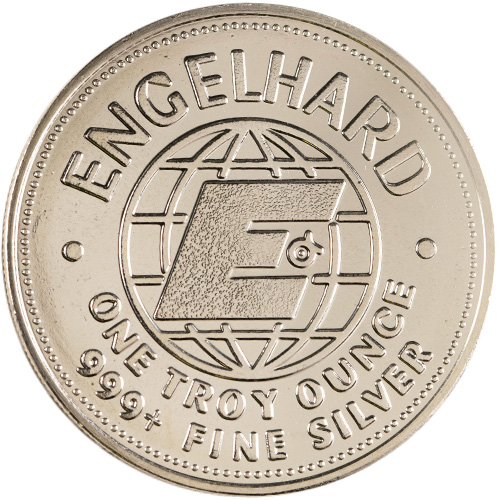 1982 was the first year of mintage for the Engelhard Prospectors. The Engelhard name is iconic in the precious metals refining industry. Engelhard’s 1 oz .999 fine Silver rounds were the first bullion rounds that were marketed to the public, adding a sense of historical value and collectability. Collectors of silver commodities know these are one of the best investments you can make because of their inspiring design and brilliant shine. Today, JM Bullion offers you the 1982 1 oz Engelhard Prospector Silver Round (E logo reverse design)!

In the late 1970s as the price of silver began to climb to $50 an ounce, the major silver refineries, such as Handy & Harman, Johnson-Matthey, and Engelhard, began producing silver bullion products, primarily 100-oz and 10-oz bars. In 1982, Engelhard was the first company to market 1-oz silver bullion rounds, which carried an image of a prospector panning, oddly enough, for gold. Silver, unlike gold, is not found in river or stream alluvial deposits. These Engelhard silver Prospectors soon dominated the 1-oz silver round market. Even Johnson-Matthey, which introduced an inspiring series of Freedom Rounds centered on the Bill of Rights, was unable to compete.

For the obverse of the 1982 1 oz Engelhard Prospector Silver Round, the iconic image of a prospector is featured. A prospector is someone who searches for mineral deposits.  The prospector on the round is designed as a man bending over and into the water. He wears a hat as he searches the calm river for gold. The inscriptions on this side of the round include: ‘U.S.A 1982, and ‘The American Prospector.  The design is surrounded by a beaded outer circle.

For the reverse of the 1982 1 oz Engelhard Prospector Silver Round, the image of the E logo is featured. It’s a big, bold E fixed within a large circle. The inscriptions on this side of the round include: ‘Engelhard’, and ‘One Troy Ounce 999+Fine Silver’.  The outer rim of the round is decorated with a beaded circle like the obverse.

If you have any questions when you buy silver, please do not hesitate to get in touch with our customer service team at JM Bullion. Our team is available at 800-276-6508, or we can be reached via our online live chat and email address features.