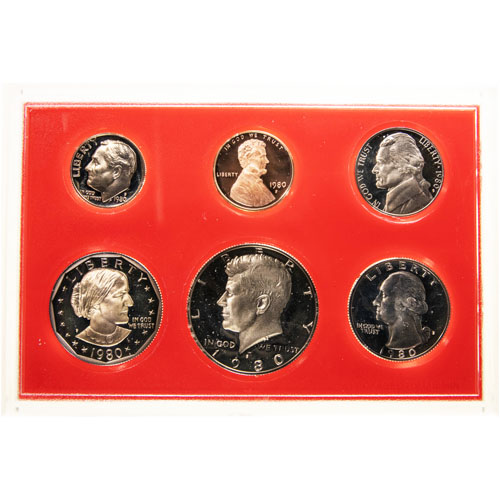 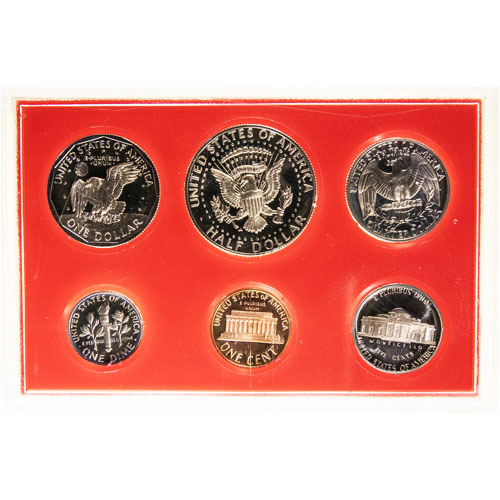 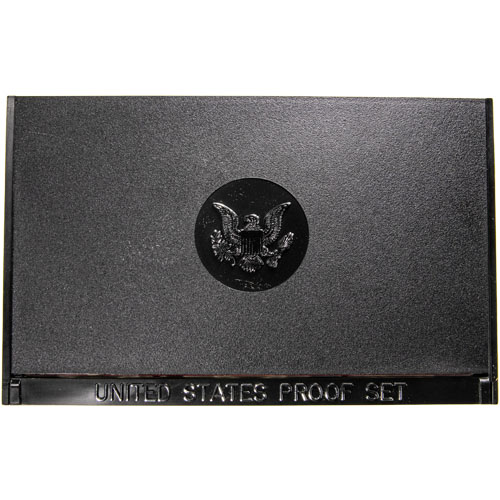 The 1980 US Mint Proof Set includes the second year of the Susan B. Anthony Dollar, along with the five other regular coins. This was the first time that a woman had appeared on a circulating coin. The Mint sold 3,554,806 of the 1980 Proof Sets, down slightly from the previous year. While the number of coins and the face value of the coins in this set remained the same, the US Mint increased the price from $9.00 to $10.00. The Proof coins were intended to have a cameo or deep cameo finish. This set was made by the US Mint in San Francisco. Currently, JM Bullion has these 1980 US Mint Proof Sets available for purchase.

In 1980, the packaging for the Proof Sets was down-sized to accommodate the smaller Anthony Dollar. The coins were no longer sealed in individual rings. They were placed in individual slots in a red plastic insert, which was sealed in a two-piece, clear plastic case. A black plastic sleeve – which could serve as a stand – slid over the clear plastic case. And the outer cardboard box had a single opening at the top to slide the main holder into.

Each Proof Set contains one each of the Lincoln Cent, Jefferson Nickel, Roosevelt Dime, Washington Quarter, Kennedy Half Dollar, and Susan B. Anthony Dollar.

The obverse of the Anthony Dollar features a right-facing profile of social reformer Susan B. Anthony. US Mint Chief Engraver Frank Gasparro, per requests, originally created a design for the new dollar that was a more modern version of Lady Liberty. However, several women’s organizations felt that it was past time for the likeness of a prominent American woman to appear on a coin, and better yet, that the likeness be that of an actual woman.

The reverse of the Anthony Dollar is based upon the Apollo 11 mission insignia. It features an eagle, in flight, clutching a laurel branch in its talons. The eagle is flying over the landscape of the moon, and there is an image of the earth just above and to the left of his head. This design was created by Frank Gasparro.

Should you have questions, our JM Bullion Customer Service team will gladly answer them. We can be reached via phone at 800-276-6508, via online live chat, or via email.