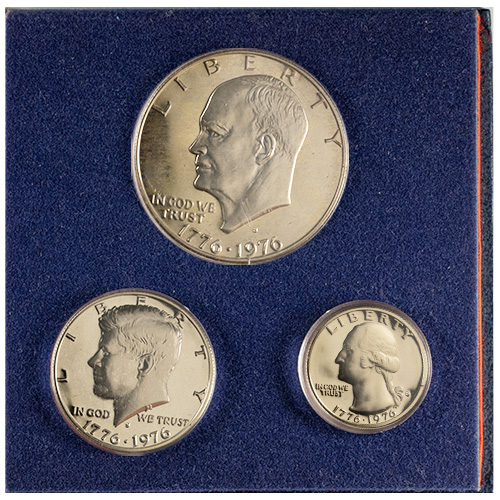 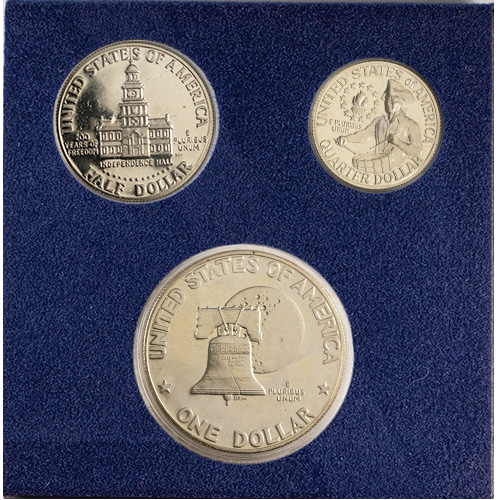 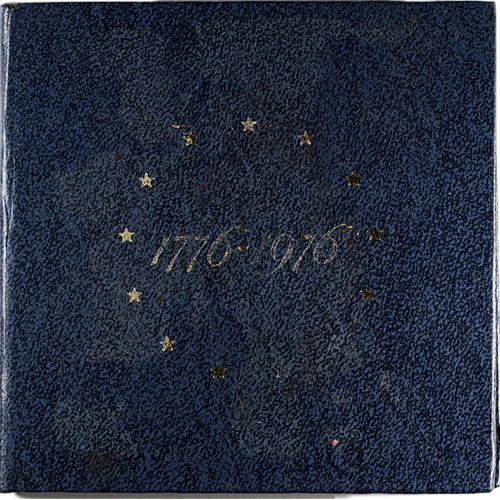 In celebration of the 200th anniversary of the signing of the Declaration of Independence, the US Mint issued a special series of bicentennial coins. These consisted of the quarter, half-dollar, and dollar coins with unique bicentennial designs on the reverse fields. In addition to the standard -cupro-nickel release, they were also issued as proof sets containing 40% silver. Right now, 1976-S Bicentennial Silver US Mint Proof Sets are available to you for purchase online from JM Bullion.

In 1970, the United States American Revolution Bicentennial Commission suggested that commemorative coins be released to celebrate the bicentennial of the Declaration of Independence. From July 1975 to December 1976, bicentennial half dollars, dollars, and quarters were issued to the public. Each coin featured a special bicentennial reverse design and the dates 1776-1976 on the obverse.

Each 1976-S Bicentennial Silver US Mint Set consists of all 3 bicentennial coins. Each one contains 40% silver and includes a beautiful mirror-like finish. The coins will arrive housed inside an elegant case ideal for storage and display. While the bicentennial may have passed, it is never too late to celebrate the signing of the Declaration of Independence!

The obverse of each coin in 1976-S Bicentennial US Mint Proof Set features a presidential portrait. The three presidents shown are Dwight D. Eisenhower on the dollar, John F. Kennedy on the half-dollar, and George Washington on the quarter. The obverse of each also contains the double date of 1776-1976. Additional inscriptions on each read Liberty, In God We Trust.

On the reverse side of 1976-S Bicentennial Silver Proof Sets there are three distinct bicentennial designs. The dollar features the superimposition of the liberty bell against a full moon. On the half-dollar, you will find a rendering of Independence Hall. And on the quarter, there is the image of a colonial drummer. Each one also contains the words United States of America, E Pluribus Unum. Also, the denomination of each coin is shown on the reverse fields.

If you have any inquiries when you buy silver, feel free to reach out. JM Bullion customer service is available at 800-276-6508. We are also available to you online using our live chat and email address features.