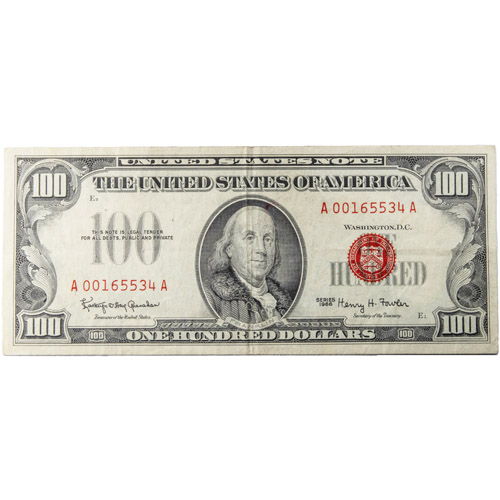 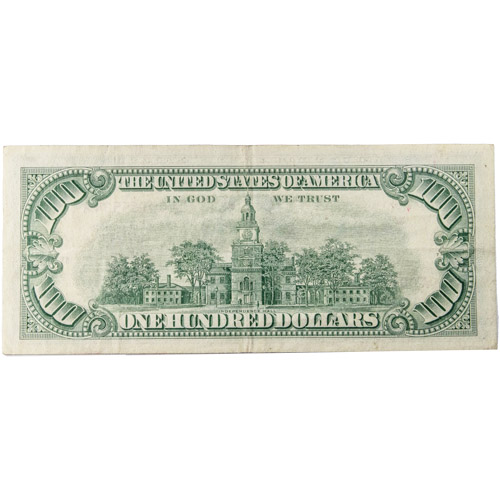 Legal Tender Notes, also known as United States Notes, were issued by the US Government from 1862 to 1971. This makes them the longest-issued form of currency in the country’s history. In this listing, you will find the 1966 $100 note featuring Benjamin Franklin. Today, 1966 $100 Legal Tender Notes are available to you online from JM Bullion in Gem Uncirculated condition.

Each 1966 Legal Tender Note in this listing on JM Bullion will arrive to you housed in a protective plastic currency sleeve. These notes are in Gem Uncirculated condition, which ranks among the highest designations on the grading scale. There is a possibility of very minor visible flaws, while the centering could be slightly off. But overall, these will be in pristine condition.

The obverse of 1966 Legal Tender Notes features Benjamin Franklin. Franklin, along with Alexander Hamilton, is the only non-president to be featured on modern currency. In red ink, you will find the serial number listed on both the left and right side. Also shown is the Treasury seal in red ink. Notations include The United States of America, One Hundred Dollars.

On the reverse side of $100 Legal Tender Notes, there is a vignette of Independence Hall. This historic civic building opened in 1753. It is notable for being the location where both the Declaration of Independence and the US Constitution were developed and adopted. In a curved numerical style, the note’s denomination is shown in each corner. Also shown are the words The United States of America, In God We Trust, One Hundred Dollars.

The one-hundred-dollar bill debuted in the United States in 1862. In 1914, the first Federal Reserve Note was issued. That same year, Benjamin Franklin appeared on the note and has been present on this denomination ever since. In 1929, the small-size $100 bill was first issued as part of the 1928 Series. This design featured Franklin and Independence Hall and became the basis for all future $100 notes.

Please feel free to reach out to JM Bullion with any questions about these legal tender notes. You can call us at 800-276-6508, chat with us live online, or email us directly.