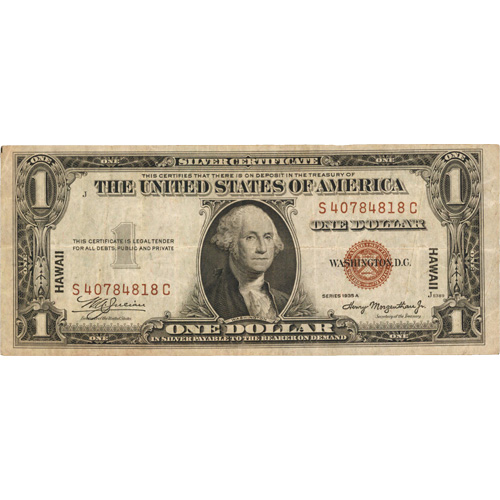 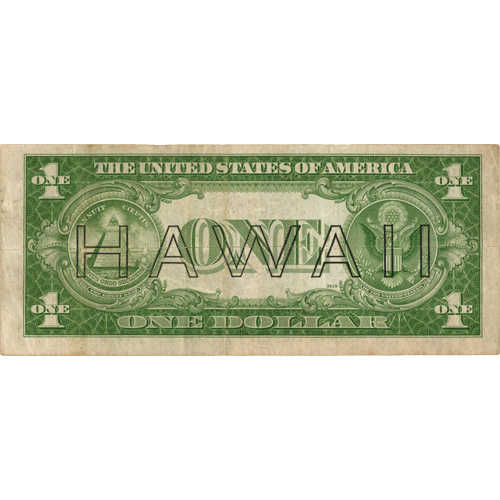 The US Silver Certificates were issued from 1878 to 1964 with countless design variations across the many denominations. Among the most notable in the long history of this paper currency series were two issues from the US during World War II. These special issues were released with distinctive ink colors and designed to be instantly demonetized in the event that the tide of war changed against the interests of the United States. Now, 1935a $1 Silver Certificate Hawaii Notes in Very Fine condition are available to you for purchase online from JM Bullion.

Within this legal tender series release, the 1935a $1 Silver Certificates represent a special-issue subset of the 1935A Series adjustments. In particular, these notes were released for specific purposes during World War II. The North Africa note had no overprint and used yellow ink. These Hawaii Notes have a HAWAII overprint on the reverse and notation on the obverse, as well as brown ink.

President George Washington features on the obverse of the 1935a $1 Silver Certificate Hawaii Note. This effigy of President Washington remains in use today on the $1 Federal Reserve Note and debuted on the Silver Certificate of the same denomination in 1923. To the left of Washingtons portrait is a notation of HAWAII printed along the vertical edge. The serial numbers and Treasury seal are printed in brown ink. These notes were only issued in this denomination in Hawaii and were designed differently to be instantly recognizable. If the Japanese were to invade Hawaii, the US would demonetize these notes so they were of no value to the Japanese.

The all-seeing eye and Great Seal of the United States are found on the reverse side of the 1935a $1 Silver Certificate. This design debuted with the 1935 Series and was authorized by President Franklin D. Roosevelt.

These 1935a $1 Silver Certificate Hawaii Notes are available with plastic currency sleeves and come in Very Fine condition. A note in this condition has moderate signs of circulation use, the potential for mild soiling, and numerous fold lines. Overall, each note has paper that is still crisp and relatively clean.