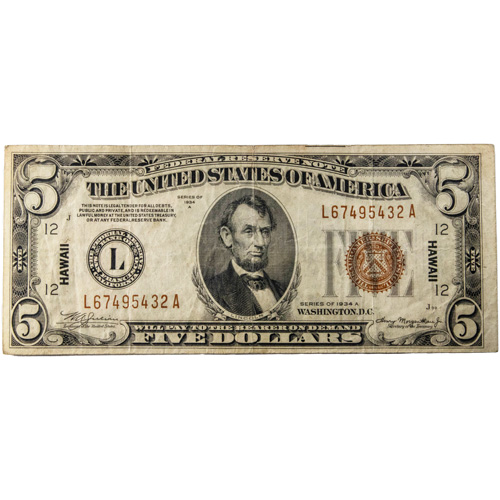 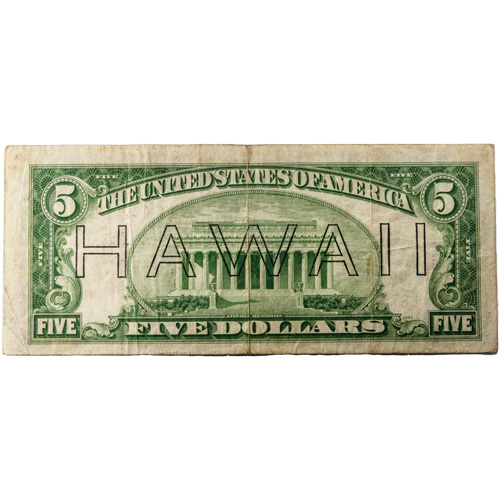 Between 1942 and 1944, the US government issued special emergency currency in the state of Hawaii. This came as a result of the Japanese attack on Pearl Harbor on December 7, 1941. In the event of an enemy takeover, the US needed the ability to declare invalid any currency in the state. Once the war ended, the government began recalling these emergency notes. However, the service members who chose to keep these notes as relics from the war ensured that at least some would survive for collectors to enjoy today. Right now, 1934a $5 Federal Reserve Hawaii Notes in Very Fine condition are available to purchase online from JM Bullion.

To separate these $5 Hawaii Notes from standard $5 bills, the green ink typically used for the serial numbers and Treasury seal was switched to brown, and Hawaii overprints were placed on both the front and back of the note. In addition to the $5 note, emergency bills were also printed in $1, $10, and $20 denominations. For the $5 Hawaii bill, a total of 9,416,00 were printed. By April of 1946, the government was actively recalling these notes, as the war had ended and Japan had not invaded Hawaii as some had feared.

When you order 1934a Federal Reserve Hawaii Notes in this online JM Bullion listing, you will receive a genuine piece of legal tender backed by the US government. As notes in Very Fine condition, these may have minor soiling and fold marks from their years in circulation. Upon arrival, yours will be protected inside a plastic currency sleeve.

Abraham Lincoln is shown on the obverse of 1934a $5 Federal Reserve Hawaii Notes. Above the portrait are the words The United States of America. Beneath it are the words Will Pay to the Bearer on Demand Five Dollars. Features unique to these emergency notes are the brown-colored serial numbers and Treasury seal. Also, vertical overprinting of the word Hawaii are found on either end of the design.

A vignette of the Lincoln Memorial is located on the reverse of $5 Federal Reserve Hawaii Notes. This historic site began construction in 1914 and in 1922 it was officially dedicated. In the lower corners, the number 5 is shown alphabetically, and in the upper corners, it is depicted numerically. The word Hawaii is overprinted across the center of the note.

If you have questions, we’re happy to help. JM Bullion customer service is available at 800-276-6508, online using our live chat, and through our email address.