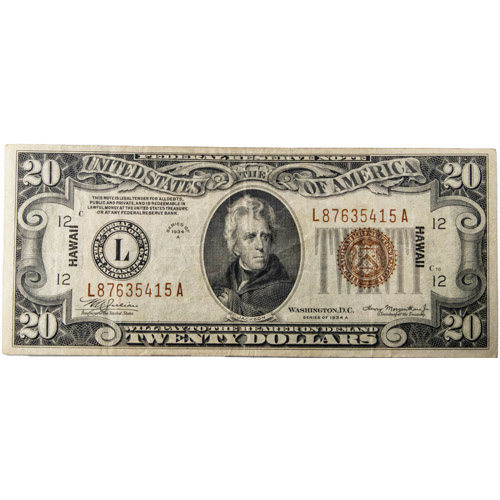 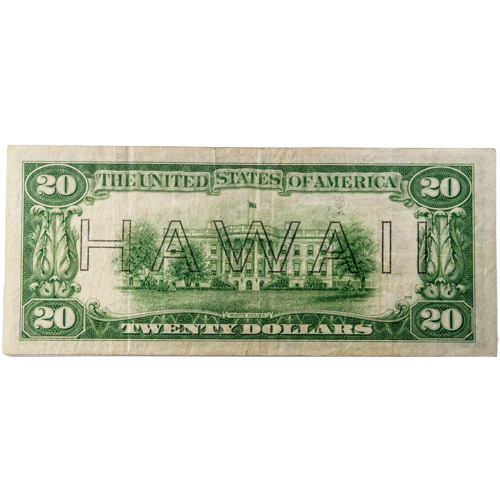 On December 7, 1941, Japan attacked the US Naval base at Pearl Harbor. This was the major catalyst that prompted the United States to enter World War II. It also prompted the American government to recall all paper currency in Hawaii in the event that Japan took over the state. In its place, special Hawaii notes were issued that the US could deem invalid if the Japanese ended up taking control of the region. Now, 1934a $20 Federal Reserve Hawaii Notes in Very Fine condition are available to you for purchase online from JM Bullion.

After the Japanese attack on Pearl Harbor, Franklin Delano Roosevelt ordered that all US currency in Hawaii be recalled. The only exception was $200 for each individual and $500 for businesses. The government then printed a series of emergency $1, $5, $10, and $20 notes. These notes featured unique brown ink and Hawaii stamps on both the obverse and reverse. Just over 11 million $20 notes were issued. When the war ended, the notes began to be recalled. However, some service members held on to them as mementos, which is why there are still some available for collectors to enjoy today.

Each of these 1934a Federal Reserve Hawaii Notes is recognized as legal tender by the United States government. They are part of the 1934a series, which does not reflect the year the note was printed, but rather when its design was validated. The notes are listed as Very Fine. This condition allows for light soiling and several fold marks along the surface. Upon arrival, you will find the note housed inside a plastic currency sleeve.

The obverse of 1934a $20 Hawaii Notes contains a portrait of Andrew Jackson. Jackson first appeared on the $20 bill in 1928, which was the 100th anniversary of his presidential election. In addition to the brown serial numbers and seal, the word Hawaii is also printed vertically on the left and right sides of the bill.

On the reverse side of 1934a $20 Federal Reserve Hawaii Note you will find a vignette of the White House. This south view of the White House was added to the $20 bill in 1928 and is still used today. Printed over this image in a large font is the word Hawaii in all capital letters.