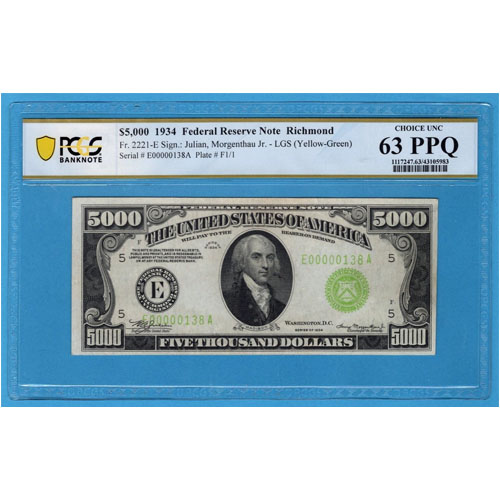 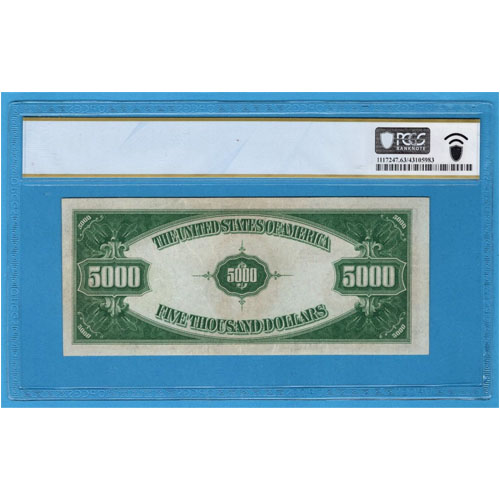 This 1934 $5,000 Federal Reserve Note is available with a grade of Choice Uncirculated 63 from the PCGS. Banknotes with this grade may have an imperfect centering on the primary design, and it is possible for several small flaws to be present. However, this note has no fold lines and good margins around the design, indicating better centering than other notes of this grade. Additionally, the note has a well-embossed design on both sides. Finally, these notes have earned a PPQ qualified from the PCGS. This stands for Premium Paper Quality, indicating the note still has vibrant ink color and good overall eye appeal.

When the 1934 $5,000 Federal Reserve Note was first issued by the United States, the average salary of an American was almost half the value of this single note. In 1945, for example, the average American salary was just $2,595. The $5,000 Federal Reserve Bank Note available here is part of the small-sized note series, a design concept introduced in 1928. The last year the US issued the 1934 Series $5,000 Note was in 1945.

Theres a reason most Americans never saw notes like the 1934 $5,000 Federal Reserve Note up close. The large denomination of notes the Treasury introduced in 1918 were largely restricted to use for bank transfers between banks or between the federal government and banks. Starting in the 1960s, these notes were removed from use and destroyed by the Federal Reserve, making remaining specimens such as this one highly valuable to collectors.