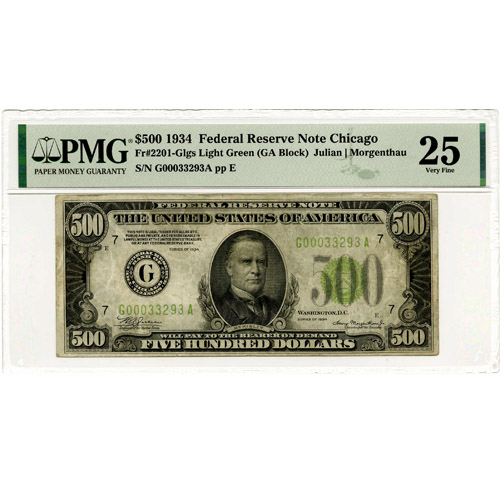 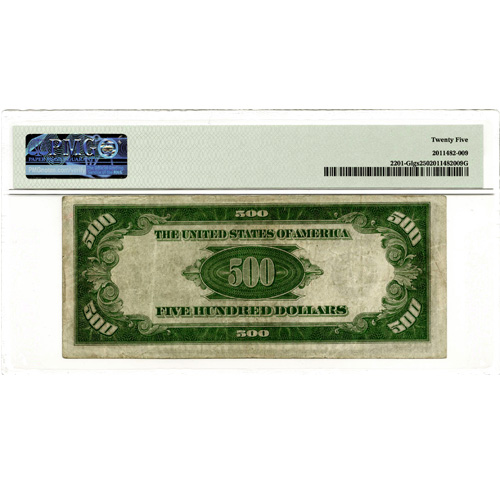 Each 1934 $500 Federal Reserve Note available here comes with a PMG plastic sleeve and a certified grade of Very Fine 25. This specific grade level indicates a paper note that has modest signs of circulation with multiple fold lines and the potential for soiling. Please note that buying more than one of these notes can result in receiving specimens that have matching or varied District Seals. The District Seals come with a number-letter combination and printed text that identifies the specific branch bank that issued the bills into circulation. For example, the seals could indicate the Federal Reserve Bank of Boston, New York City, or Philadelphia.

$500 Federal Reserve Notes were introduced in the 1918 Series of Federal Reserve Notes. This followed the introduction of the program in 1914, with the 1918 Series issuing denominations of $500, $1,000, $5,000, and $10,000. The original design of the $500 note featured a detailed vignette on the reverse and the image of John Marshall on the obverse. With the 1934 Series release, President William McKinley ascended to the obverse field of the note.

President William McKinley, the 25th President of the United States of America, is found on the obverse of 1934 $500 Federal Reserve Notes. His portrait replaced John Marshall on the note when it was redesigned in 1934. On this side of the note, you will find the District Seal of the specific Federal Reserve Bank branch location that distributed the notes. These legal tender notes are signed by the Treasurer of the United States and the Secretary of the Treasury.

The denomination of the 1934 $500 Federal Reserve Note is present on the reverse side of the paper notes. With the 1934 redesign of the note, the former vignette that had been in use since 1918 was replaced by a simpler design that noted the nation of issue, as well as the face value of the bill various times.

If you have any questions, JM Bullion is here to help. Please contact us with questions at 800-276-6508, chat with us live online, or email us directly.