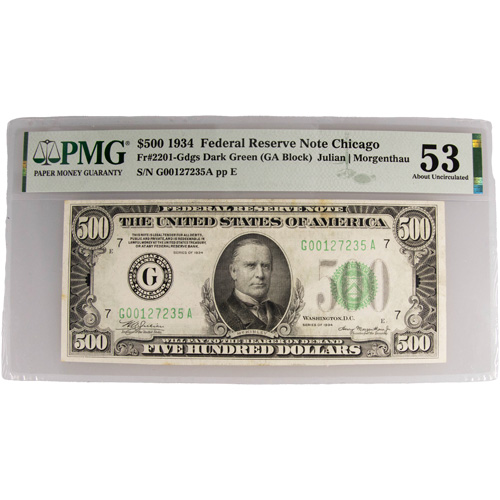 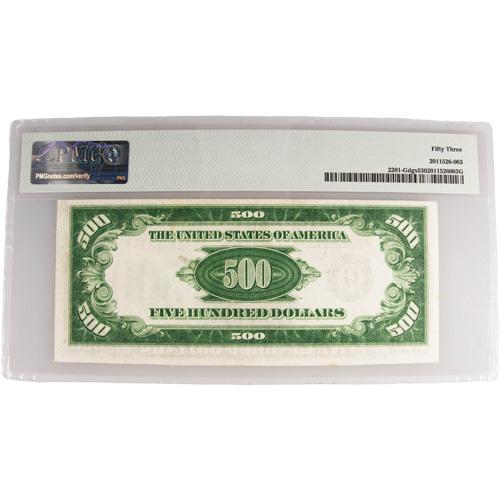 In the 1918 Series of Federal Reserve Notes, the United States introduced the largest paper note denominations in its history. These notes were offered with face values ranging from $500 to $10,000 and were not intended for circulation use. After the program was canceled in the 1970s, the vast majority of the notes were collected and destroyed. Right now, 1934 $500 Federal Reserve Notes in certified condition are available to purchase online from JM Bullion.

Each of the 1934 $500 Federal Reserve Notes available in this listing from JM Bullion comes with its own plastic currency sleeve. These notes have been graded About Uncirculated 50, or better. Notes in this condition exhibit some modest signs of wear and handling, but only showcase one or two heavy fold lines.

The 1918 Series was second to the 1914 Series in the Federal Reserve Note program. The latter series introduced the common, everyday denominations of $5, $10, $20, $50, and $100 notes. The former series was introduced with denominations that would never see circulation use with average Americans. The 1918 Series notes were intended for use in bank-to-bank transfers, not everyday use.

Obverse imagery on the 1934 $500 Federal Reserve Note includes the portrait of President William McKinley. This portrait of the President follows a popular trend of the era in its use of a slight-profile relief for the image and a porthole frame. This image of McKinley replaced the original 1918 Series design of Alexander Hamilton.

Reverse designs on the 1934 $500 Federal Reserve Note include a depiction of the nation of issue and the denomination. Previously, these notes had a detailed vignette on the reverse. The 1934 Series overhaul changed the reverse of all the notes to simpler designs denoting the nation of issue, with the face value both at the center of the note and in all four corners.

If you have any questions about these certified Federal Reserve Notes, please feel free to ask. JM Bullion customer service is available to assist you at 800-276-6508, online using our live chat, and via our email address.