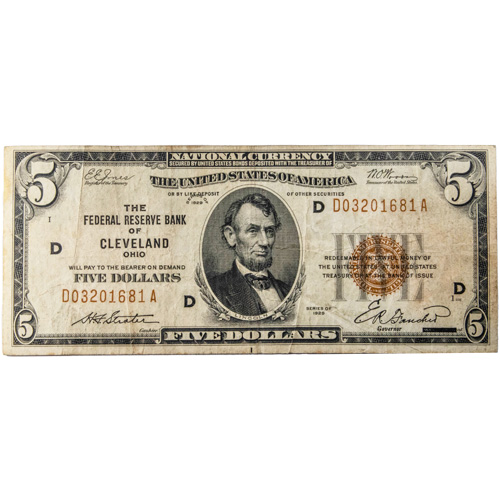 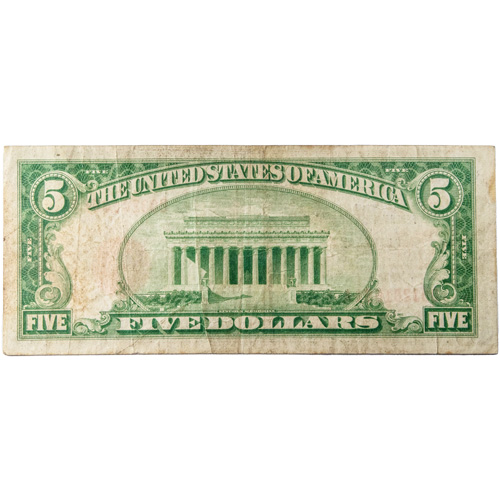 In 1928, US paper currency was re-designed and included a new small size that was shared across all denominations. This brought uniformity and consistency to paper currency and set the standard for the legal tender notes in circulation today. In 1929, those same designs were featured on a brand-new issue of Federal Reserve Bank Notes. Today, 1929 $5 Federal Reserve Bank Notes are available to purchase in Very Fine condition online from JM Bullion.

The earliest $5 bill was a Demand Note issued in 1861. Alexander Hamilton was the first figure to be featured on the note, and in later years Andrew Jackson and Benjamin Harrison appeared in its design. Abraham Lincoln, who still graces the $5 bill to this day, did not appear on it until 1914. The first small-sized note to feature Lincoln arrived in 1928 and entered circulation the following year. This design set the template for the $5 bill for decades to come, until the note was re-designed in 2000 as an anti-counterfeiting measure.

All of the 1929 Federal Reserve Bank Notes in this JM Bullion listing online will arrive in Very Fine condition. Per this designation, you can expect some signs of circulation, such as various fold marks and light soiling. JM Bullion fully insures all orders while in transit and packages each note inside a protective plastic currency sleeve.

Abraham Lincoln is featured on the obverse of $5 Federal Reserve Bank Notes. In each corner of the note, the denomination is listed numerically. Also shown are the serial numbers in brown ink, which is a contrast to the green coloring of the Federal Reserve Notes. Also colored brown is the Treasury seal. On the left side of the note, you will find its issuing bank.

The Lincoln Memorial is depicted on the reverse of the 1929 $5 Note. This historic site in Washington DC began construction in 1914 and was officially dedicated on Memorial Day weekend, 1922. On the lower corners of the reverse, the denomination is shown alphabetically. In the upper corners, it is depicted numerically.