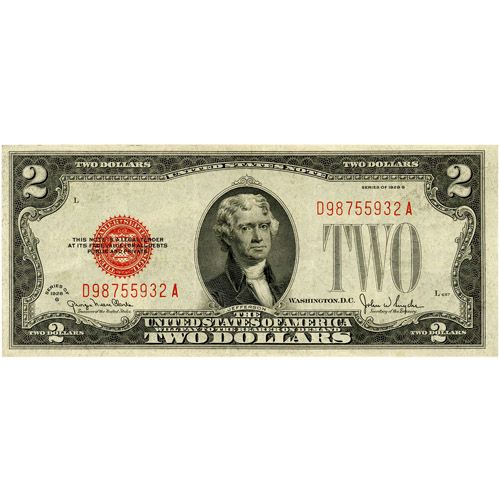 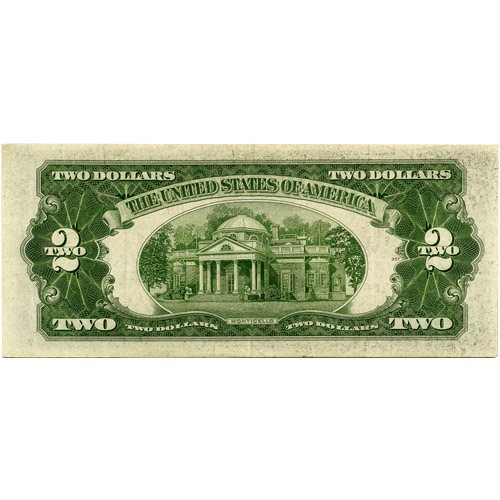 Each 1928 $2 Legal Tender Note in this product listing is available to you in Very Fine+ condition. Notes in this condition have light signs of circulation use, the possibility of light soiling, and seven-to-10 folds. The notes in this listing are available to purchase with a protective currency sleeve.

1928 Legal Tender Notes represent the first release of small-sized versions of the United States Note. The 1928 $2 Note was issued in eight varieties, with the series noted on the obverse Series of 1928, or the subsets of Series of 1928A, 1928B, 1928C, 1928D, 1928E, 1928F, and 1928G. All of the notes have the signature of the Treasurer of the United States and the Secretary of the Treasury, with serial numbers in red ink and the US Treasury seal in red ink to the left of President Jefferson. Please note that buying more than one can result in receiving notes of the same series and with the same signature combinations.

Jefferson’s home at Monticello is found on the reverse of 1928 $2 Legal Tender Notes. This design made its debut on the $2 United States Note in 1928 with the release of the first-ever small-sized versions of the notes.

If you have any questions, JM Bullion is here to help you. Please feel free to reach out to our team at 800-276-6508, chat with us live online, or simply send us an email with your inquiries.

Anthony from - December 13, 2021
"There's something tantalizing about holding a near 100 year old bill. Bought a couple as a gift and they came in a protective sleeve (which itself was in a cardboard envelope). Paying for something above face value might sound nuts, but when you consider the rarity of $2 bills in general as well as the US Notes being discontinued, holding such a bill will always leave you with awe."