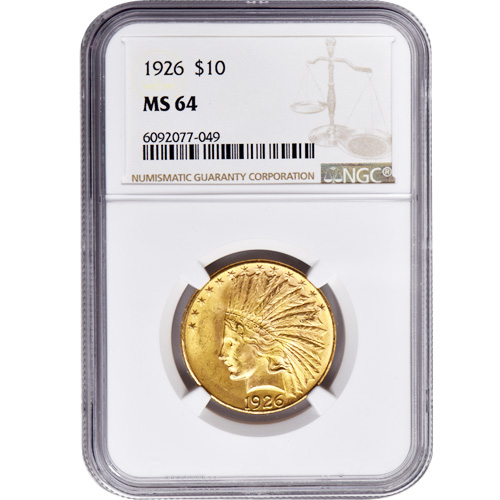 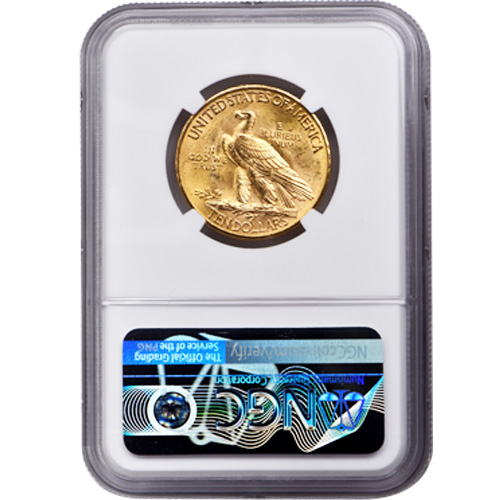 The US Eagle Series was introduced by the United States Mint in 1795. The $10 Eagle was struck regularly from 1795 to 1916, with the Turban Head design launching the series and the Indian Head design representing the final imagery to appear on the coins.

In 1916, with World War I raging in Europe, the United States Mint opted to discontinue striking new gold coins in the US Eagle Series. This was the result of two factors. First and foremost, gold coins were commanding premiums above the assigned face value. Secondly, there was a flood of gold pieces coming into the United States from foreign powers paying American merchants and commercial entities for war materials with gold coins. As a result, the US Mint would strike fresh Indian Gold Eagles just five times after 1916: 1920 in San Francisco, 1926 in Philadelphia, 1930 in San Francisco, and 1932/1933 in Philadelphia.

Lady Liberty graces the obverse of 1926 $10 Indian Gold Eagles. Designed by Augustus Saint-Gaudens, the left-profile portrait was originally designed to include a feathered crown. However, President Theodore Roosevelt insisted on the portrait using a feathered headdress traditionally worn by indigenous male leaders.

An American bald eagle is depicted on its perch in the reverse of 1926 Indian Gold Eagles. The design from Saint-Gaudens shows the eagle resting on a sheaf of arrows with its wings at its side and an olive branch around the cluster of arrows.

These 1926 $10 Indian Gold Eagles are available in Mint State 64 condition. Coins in this condition showcase average mint luster, groups of light contact marks with only a few in the primary focal fields, and only one or two scattered hairlines. JM Bullion selects your coin after your payment has cleared.

We are not able to guarantee whether you receive a coin with a PCGS or an NGC label. All coins are MS64 specimens. If you buy more than one, you may get coins with the same or varied labels.

JM Bullion customer service can answer your questions about gold for sale at 800-276-6508. We are also available online through our live chat and email address features.