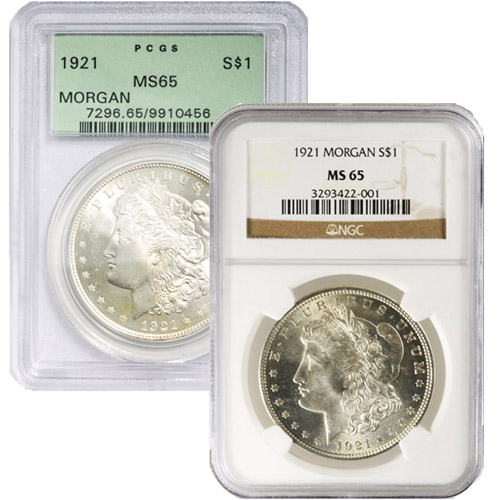 The United States Mint has irregularly issued silver dollar coins throughout its history with the denomination. The first known silver dollar was issued in 1804, but regular coining didn’t start until the 1830s with the release of the Seated Liberty design. Canceled in 1873, the Seated Liberty was later replaced by a coin that remains one of the most popular in the 21st century among collectors: the Morgan Silver Dollar. Now, 1921 Morgan Silver Dollar Coins are available to you for purchase online at JM Bullion in certified condition.

The last time the United States Mint issued a silver dollar coin in circulation was 1935. This was the second year in a two-year release of Peace Silver Dollars, a coin issued in 1921 to replace the Morgan Dollar and carry silver dollar coining through the 1920s and 1930s until the requirements of the Pittman Act of 1918 were met.

In 1921, the US Mint resumed coining silver dollars for the first time since 1904 and started the year with the Morgan Silver Dollar. Though the 1921 Morgan Silver Dollar was a one-time strike of the design while a new image was created, it ended up being the highest-minted Morgan Silver Dollar date. Some 86.73 million coins were struck at the Philadelphia, Denver, and San Francisco Mints.

Liberty is on the obverse of the 1921 Morgan Silver Dollar Coins. This vision shows Liberty in left-profile relief as she wears a Phrygian cap on her head. She is also wearing a coronet crown and laurel wreath.

These 1921 Morgan Silver Dollar Coins are available in Mint State 65 condition. These coins showcase attractive, high-quality mint luster for the date and come with possible flaws such as small, scattered marks, no more than two larger marks, and one or two small patches of hairlines.

JM Bullion customer service is available to assist you at 800-276-6508. Our team is available online as well using our live chat and email address features.