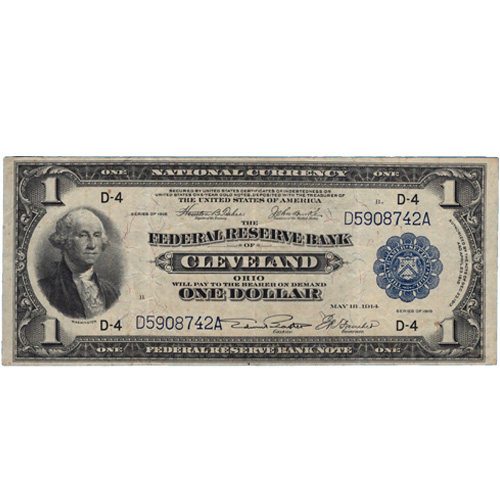 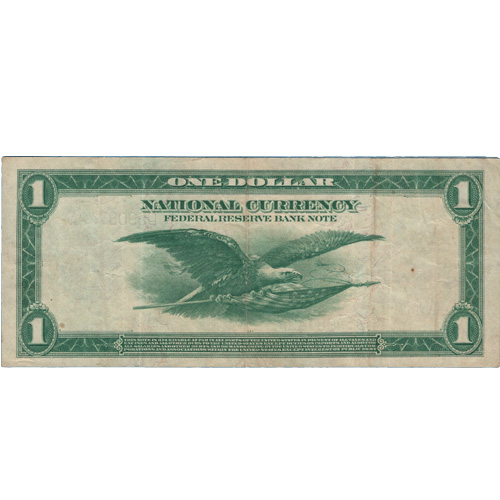 Each 1918 $1 Flying Eagle Federal Reserve Bank Note listed here was introduced for the first time in 1918 and comes with a protective currency sleeve for shipping. This sleeve helps protect the Very Fine condition of the notes. A note in Very Fine condition boasts its original crispness from when it was first printed. However, as a result of light circulation, you will notice folds, wrinkles, or other creases. Otherwise, the other flaws in the note are not easily seen by the naked eye. The overall appeal is above average for such a note.

On the obverse of 1918 $1 Flying Eagle Bank Notes is a portrait of President George Washington. Unlike other notes, this design puts Washingtons bust in an oval shape to the left of the central design field. In the center of the note are inscriptions of The Federal Reserve Bank followed by the name of one of the 12 Federal Reserve Banks. This includes banks such as Boston, Philadelphia, Cleveland, Atlanta, Chicago, Dallas, or Minneapolis. The serial numbers and US Treasury seal are featured in blue ink.

The reverse face of 1918 Flying Eagle Federal Reserve Bank Notes comes with a depiction of the American bald eagle. Similar to the Black Eagle from the 1899 Silver Certificate, this bald eagle has its wings flexed with its talons clutching an American flag on a flagpole.

If you have any questions, JM Bullion would be happy to help. Please call us at 800-276-6508, chat with us live online, or simply send us an email with your inquiries.