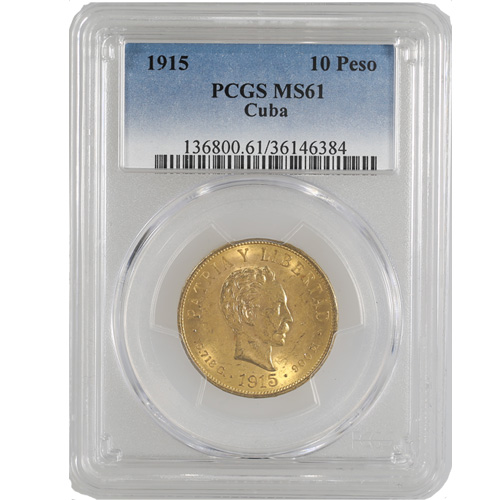 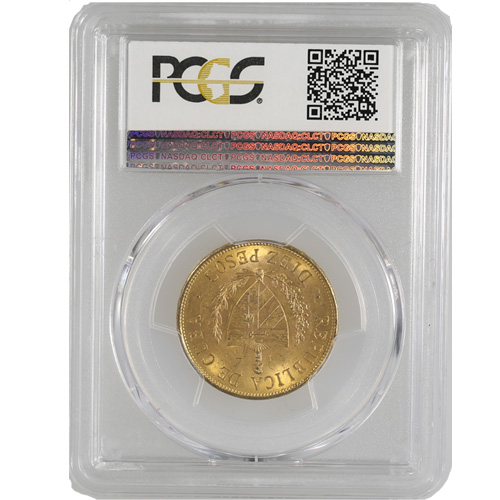 The coins of the Cuban Gold Peso series are a unique piece of 20th-century gold coinage. Issued after formal independence in 1902, the Gold Pesos of Cuba were actually designed and struck in the United States. Remaining specimens from this series are popular collector items. Right now, 1915 10 Peso Cuba Gold Coins with PCGS certification are available to purchase online at JM Bullion.

Each 1915 10 Peso Cuba Gold Coin available in this listing comes to you with a PCGS plastic slab. The coins listed here have a Mint State 61 certification. Coins in this condition have diminished mint luster with a variety of flaws such as noticeable hairlines, clusters of large and small contact marks, and possible rim nicks.

Cuban Peso gold coins were introduced in 1915 with denominations of 1, 2, 4, 5, 10, and 20 Pesos. The coins all shared the same obverse and reverse design elements, with the 20 Peso coin the only one not issued in 1916. United States Mint Chief Engraver Charles E. Barber created the design elements for these coins, one of his last contributions to coin design before his death in 1916.

The obverse of 1915 Cuba Gold Coins features a right-profile bust of Jose Marti. Considered a martyr in Cuba, Marti was one of the leading voices of Cuban independence. He traveled extensively throughout the United States and Latin America promoting independence for Spanish colonies and speaking out on democracy, freedom, and Liberty. Marti was more than a voice for Cuban independence though. He was also active on the battlefield in the search of freedom. He was killed in 1895 at the Battle of Dos Rios.

On the reverse of 1915 10 Peso Cuba Gold Coins is an image of the national coat of arms of the Republic of Cuba. This design shows a spade-shaped shield with a wreath of oak and laurel around it. The top third of the shield has a view of a harbor surrounded by mountains with a key and the rising sun on the horizon. The bottom two-thirds is split vertically with different designs on each side.

If you have questions when buying gold, please feel free to ask. JM Bullion customer service is available to you at 800-276-6508, online using our live chat, and via our email address.