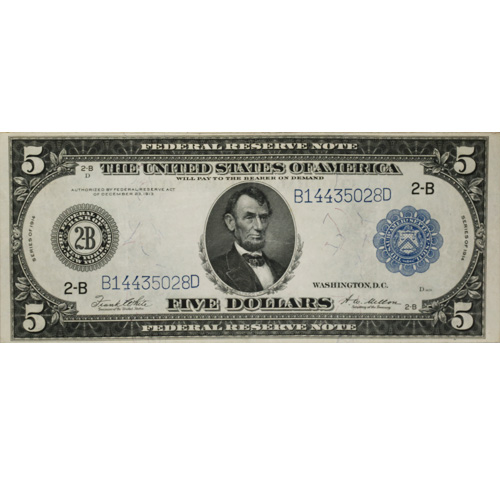 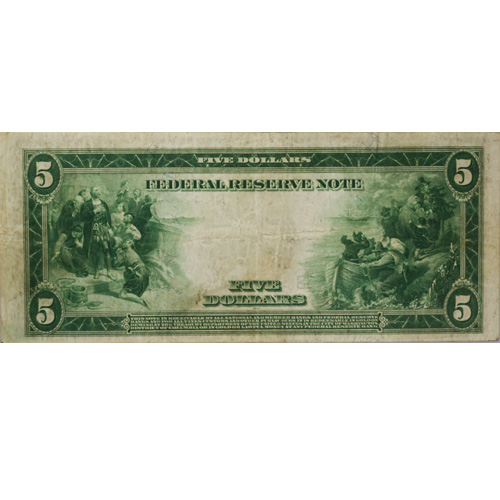 In 1914, the United States Treasury introduced the existing modern paper currency that Americans carry around in their pockets to this day. The 1914 release of the Federal Reserve Note represented the last notes introduced into circulation in the United States using the older large-sized format. Now, 1914 $5 Federal Reserve Notes are available to you for purchase online from JM Bullion in Very Fine condition.

Obverse imagery on the 1914 $5 Federal Reserve Note includes the long-running portrait of President Abraham Lincoln. The 16th President of the United States, President Lincoln is remembered as the Great Emancipator and the Protector of the Union for his leadership of the United States during the Civil War with the Confederate States of America. While President Lincolns bust has been modernized several times since 1914, it remains on the modern $5 bill. The notes have either red serial numbers and US Treasury seals or blue serial numbers and seals.

Reverse designs on the 1914 Federal Reserve Note in this denomination are unique. This first release of the $5 Federal Reserve Note came with a blank space at the center flanked by two paintings. The mural on the left depicts Christopher Columbus first steps on land in the New World. To the right, there is a mural that captures the moment the Pilgrims disembarked from the Mayflower and rowed ashore at Plymouth Rock.

These 1914 $5 Federal Reserve Notes are available with protective currency sleeves. Each note is in Very Fine condition, an impressive factor for a note that is more than a century old. A note in this condition features most of its original crispness with folds, wrinkles, and other signs of use in circulation possible. The notes will have very good eye appeal with no major, noticeable tears, stains, or other visible detractions.

JM Bullion customer service is available to you at 800-276-6508. You can also contact our team online using our live chat and email address features.