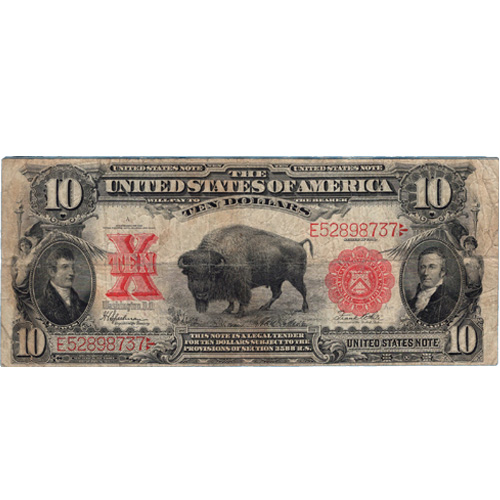 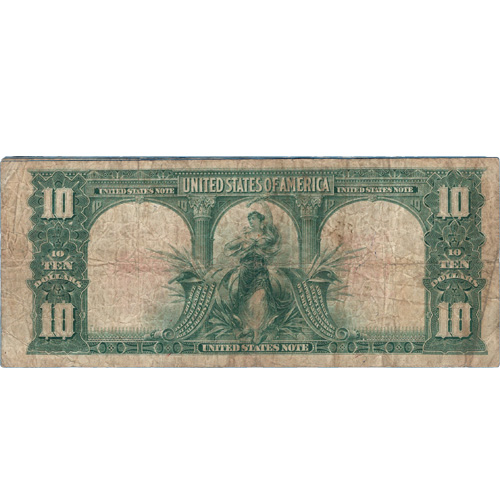 Arguably one of the finest examples of American artwork on national paper currency, the Bison Note from 1901 is highly sought-after among collectors in the modern era. Some estimates put the number of existing specimens from the 1901 Bison Note, in all conditions, at no more than 4,500 notes. You now have the opportunity to purchase one of these coveted “horse blanket” notes with JM Bullion. Today, fine condition 1901 $10 Bison Legal Tender Notes are available to you online from JM Bullion.

The 1901 $10 Bison Legal Tender Note was issued by the United States Treasury in the United States Note, or Legal Tender Note, program. As of 2021, the US Note remains the longest-running paper currency in American history with a 109-year production cycle from 1862 to 1971. With modern Federal Reserve Notes introduced in 1914, modern American paper currency won’t surpass the US Note in longevity until 2024.

All of these 1901 $10 Bison Legal Tender Notes come with a plastic currency sleeve for protection during shipping. The notes available here are considered Fine-or-better conditions. A paper note in fine condition will show common signs of circulation use that include folds, wrinkles, and creases, as well as possible color fading and stains. You will also notice a lack of crispness to the note. It is possible some of the notes will present with above-average Fine condition elements. Overall, the imagery remains beautiful to the eye for a piece that is nearly 120 years old.

A large American bison is featured at the center of the 1901 Bison Legal Tender Note. The image of the bison depicts the shaggy beast in its natural habitat on the American Plains. The creature is shown in a three-quarter profile from a left-sided relief. The design of the buffalo may showcase the creature in the wild, but the inspiration for the design actually came from a captive bison at the National Zoo in Washington D.C. that had been named Pablo. To the sides of the bison design, you will notice the portraits of Lewis & Clark, the leaders of an expedition to chart the territories acquired in the Louisiana Purchase.

For the reverse design of 1901 $10 Bison Notes, the US Treasury features an image of Columbia. Though Lady Liberty has surpassed this female figure in American popular culture in the decades following World War I, Columbia is the historic female representation of the United States of America.

Please don’t hesitate to reach out to JM Bullion. Our customer service team can assist you at 800-276-6508, online using our live chat, and via our email address.