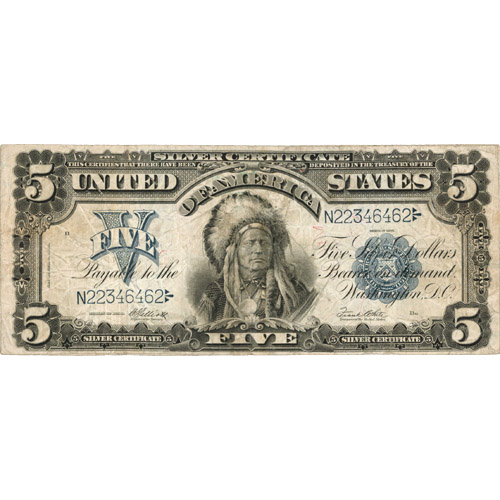 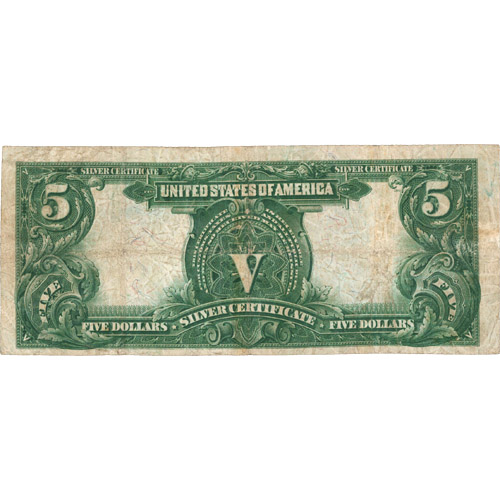 Each of the 1899 $5 Silver Certificate Chief Notes available here comes in Very Fine condition with a plastic currency sleeve. Paper notes in Very Fine condition have an acceptable range of flaws that includes moderate signs of circulation use, mild soiling, and numerous folds to those notes lighter signs of use, light soiling, and no more than 10 fold lines. All of these notes are free from major detractions and have good visual appeal.

The 1899 redesign of the $5 Silver Certificate replaced the Educational Series design after the latter was in production for just three years. The effigy of the Hunkpapa tribal chief, Running Antelope, would go on to feature on the $5 Silver Certificate for more than two decades. The effigy of Running Chief was eventually replaced in 1923 by a portrait of President Abraham Lincoln.

The obverse side of the 1899 $5 Silver Certificate Chief Note features the portrait of Running Antelope. He was the chief of the Hunkpapa tribe, a Lakota tribe that was one member of the seven councils of fire in the Lakota Nation. Running Antelope rose to the position of chief of his tribe in 1851. Though he was notable for his bravery in war, but also his oratory skills and his diplomacy as leader of his tribe.

On the reverse face of 1899 $5 Silver Certificate Chief Notes is a simple design element indicating the denomination of the note. There is a large Roman numeral V at the center of the note, with numeric 5s as well.